The term ‘budget optic’ often creates a reaction in me that is akin to what happens when I hear nails on a chalkboard. Budget optics usually suck, even though people will often defend them till they’re blue in the face. Optics from no-name companies on Amazon find themselves on rifles way too often. However, there are always exceptions to the rule, and the Bushnell TRS 25 seems to be one of those exceptions.

The TRS 25 is super cheap, but does it work?

The TRS 25 came out years ago and has since steadily proved itself to be the alpha when it comes to budget optics. I remember distinctly avoiding it purely due to its price tag. I assumed with such a low price, and it was just more junk. However, one way or another, my curiosity overwhelmed me. I kept seeing the TRS 25 pop up and hearing good things about it. So I finally purchased one.

It’s lived it’ss life mainly sitting on a 9mm PCC for several years now. I think I have a pretty good opinion on how the ole optic holds up.

The TRS 25 falls into the realm of being a compact red dot. The objective lens is 25mms wide, and the whole package is only 2.5 inches long. Weight-wise you won’t feel anchored by the 3.6 ounces you’re strapping to your gun.

Bushnell includes a low mount integrated into the optic but adding a high mount is easy and gives you that AR-height co-witness that we all know and love. The Hi-Rise model makes this a one-and-done thing, but you can use any Picatinny rail riser if you so choose.

A cheap optic combined with a cheap magnifier gives a budget option for cheapo carbines.

The TRS 25 packs 11 brightness levels in its simplistic and old-school rotating brightness wheel. In the middle setting, it will last for 5,000 hours. Not too bad for an optic that utilizes a CR2032 battery.

To keep things versatile, you get a 3 MOA red dot that would make it a natural on centerfire and rimfire rifles as well as shotguns and even sport-style pistols like the Ruger MK series. The little 3 MOA dot works rather well for most firearms.

The TRS 25 looks like a million other bottom-barrel grade red dots. They all tend to have a similar design, but somehow the TRS 25 rises above that. Perhaps Bushnell was more demanding with their Chinese contractors, or they just put out the right specs to the right people.

The TRS 25 provides an efficient low cost option for shooters on a budget.

Budget red dots is a spectrum of red dots. Depending on who’s saying it can mean anything from the junk tier optics that cost anywhere from 30 to 60 dollars I mentioned previously to options from Holosun that cost a couple of hundred bucks. The TRS 25 sits anywhere from 80 to 120 bucks depending on the mount included.

That 3 MOA red dot does do something different than most budget red dots. Most hit the 2 MOA mark, making them solely for rifles. That little extra size makes this dot a little more versatile. It’s not the crispest, clearest circular dot. It certainly has some rough edges to it when you compare it to a more expensive dot.

It’s tough to see the green hue, but it’s there in real life.

The 11 brightness settings are important to consider. Can a budget optic get bright enough to see during the day? I can tell you the TRS 25 certainly can. I live in the sunshine state, so my optics gotta get nice and bright. The TRS 25 works perfectly at high noon at settings 8, 9, and sometimes 10.

At the higher brightness levels, you’ll see some halo effect in the optic. Also, the wheel that controls the brightness level is a major hassle. It’s stiff and doesn’t move easily. To be fair, I’d prefer it to be stiff than loose. (There is a joke in there somewhere.)

To the Church of Steel and Lead

Mounted on my el-cheapo PCC, I’ve used the optic to put hundreds of rounds down range and for numerous range trips. It’s a fun gun beyond anything else and came from my early days of AR Tom Foolery when the purse strings were tight, and 9mm cost eight bucks a box. The TRS 25 is a very fitting red dot for this blue-collar build.

What you first notice when looking through the lens on the TRS 25 is a noticeable greenish hue to it. That is the reflective coating that allows you to see your red dot. The coating allows all light except red to pass through it, which captures the light emitted from the emitter and gives you a usable aiming point. 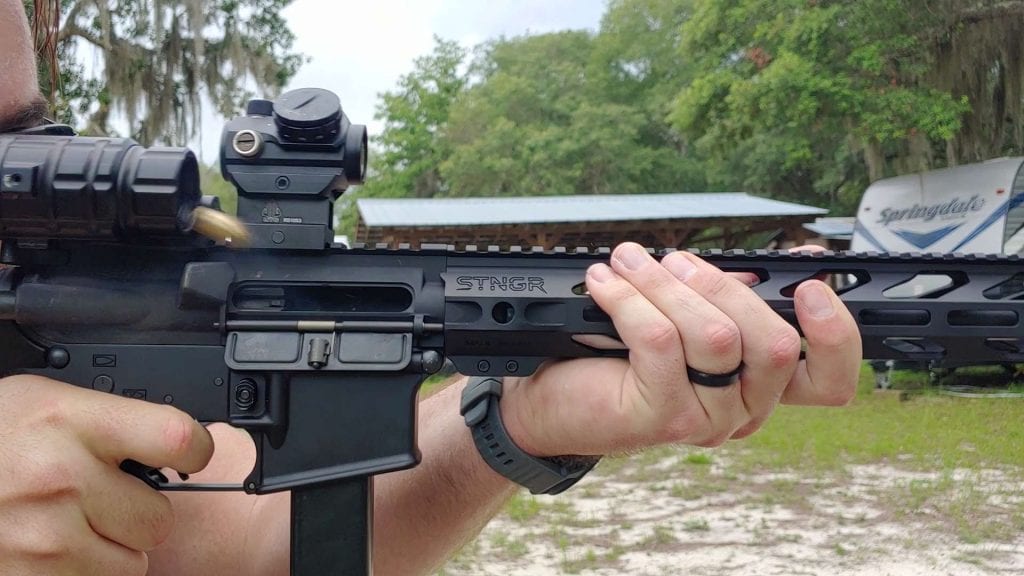 Going pew pew with the TRS 25.

The reason you see so much hue, especially compared to other dots, is that the coating is cheaper and likely applied a bit thicker. These coatings allow you to have a bright dot that uses less power.

The second thing you’ll notice is a big square sitting in the lower right quadrant. That is your emitter, and it’s glued in place. That’s kind of the norm with cheap optics. It may bother some—my TRS 25 even came with a warning letting you know what it is and that your dot isn’t broken and this glob was normal.

Zeroing requires a flat head tool or brass casing. It’s simple, and the dot moves 1 MOA per click. It’s not precise, but it’s also a red dot and a red dot range that’s precise enough. Once you got the dot on target, the fun can begin.

I’ve put thousands of 9mm rounds downrange with the TRS 25, and admittedly, 9mm ain’t much of a challenge to the topic. However, its zero has never budged, and the optic has yet to fail me. If I turn it on and it doesn’t work, then I just gotta swap batteries, and I know it comes right back to life.

For you kind folks, I tossed it on a more potently powerful boomstick in the form of a 12 gauge pump-action shotgun. I wanted to see if that emitter would flutter, the dot fail, and if the zero would falter. We couldn’t do it with just birdshot, so I loaded up some standard Federal Buckshot into a Sentry 12 shotgun and let it loose. 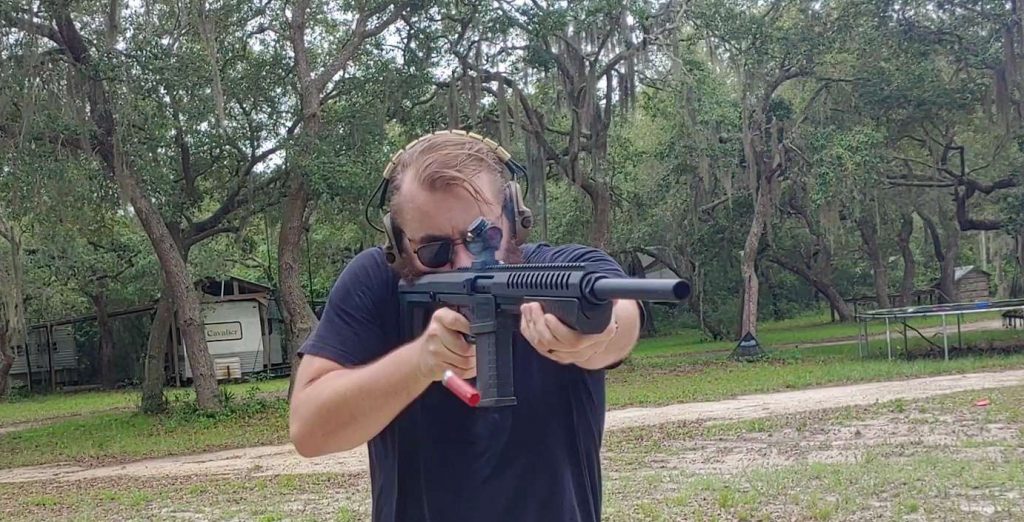 Can it stand up to the 12 gauge recoil?

I made sure to focus on the dot to see if it would flicker off between shots. That’s often a clear sight of poor battery connection. In 20 rounds of buckshot, it remained on. My shoulder might’ve been feeling it, but the TRS 25 soldiered through.

I popped it back on the PCC and let it fly. The zero held without issue. Not too bad, but next, I strapped it to my ASP Red Gun and dropped it. I dropped it from shoulder height and I dropped it on both sides and the top a few times. 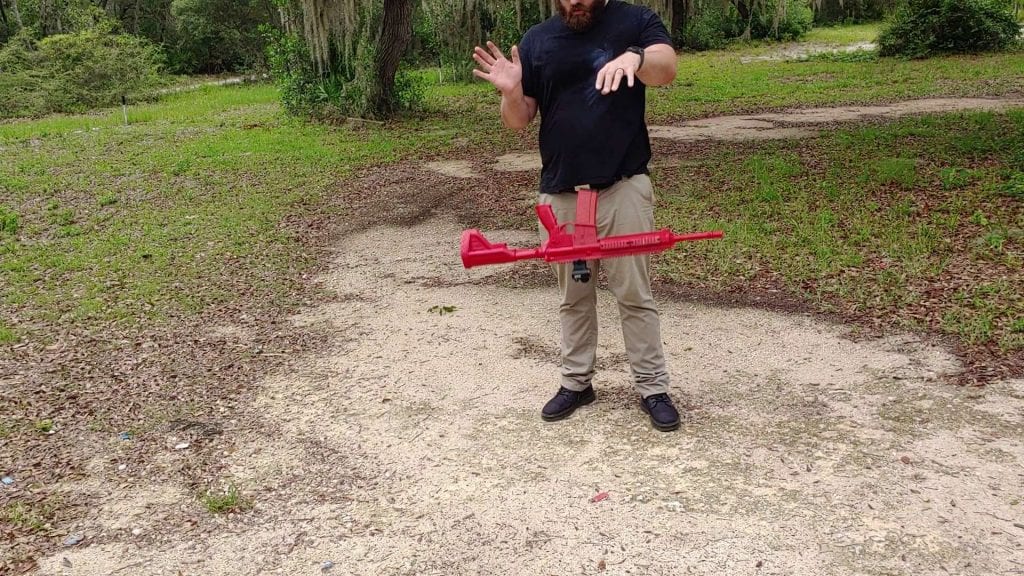 That emitter must be tough because it held zero once I tossed it back on my PCC. It’s a sturdy little optic.

Downsides of the TRS 25

The TRS 25 is a robust, durable red dot option that provides a truly budget-friendly experience. As such, it often functions well above its price point. Most optics priced this low wouldn’t stand drops, falls, or even rough recoil. Mine has been in use for years without an issue and for several thousand rounds. (Admittedly, most were 9mm from a rifle.)

The optic does have a couple of downsides related to the dot. If you move it up and down and left to right rapidly, you’ll see the dot ‘stretch’ a bit, kind of like a cheap laser pointer. It’s not a huge deal, but a little distracting when transitioning from target to target.

It also does have that halo effect on bright settings that’s just a little annoying. If you can get past those flaws, you’ll find a great little optic. I wouldn’t use it for duty use, but for home defense and range use, it’s a great little dot. 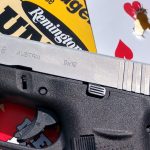 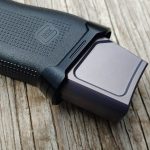