Today were are talking Lithium, and I don’t mean the prescription drug or great Nirvana song. Nope I mean the Lithium PCC 9mm compensator from a company called Ultradyne. The company famously makes the C4 iron sights with their unique sight picture and design. They’ve also dived headfirst into the world of muzzle devices.

The Lithium PCC aims to tame the recoil of 9mm PCCs, most of which use a simple and reliable direct blowback design. It’s a solid, well-proven way to make a 9mm PCC or subgun, but the downside is recoil. A 9mm PCC recoils like a 5.56 caliber rifle. There is no reason we should accept rifle recoil in a rifle platform from a pistol cartridge. Heck, reducing recoil and muzzle rise is always a noble cause, and as such, the Lithium PCC compensator aims to make any 9mm PCC or subgun a bit more controllable.

Here is where you’ll need two 13/16th wrenches. Index the muzzle device until it’s lined up appropriately, then hold it in place with a wrench. Take your second wrench and work the timing nut counterclockwise against the muzzle device. If you have a torque wrench, it should be 25-foot pounds.

Boom, you’re done. I did this at my kitchen island in about five minutes, with two minutes of getting it just right. I tossed mine on my super short and very handy CMMG Banshee Mk17 AR pistol. It’s a 9mm AR-type pistol with a radial delayed system that already delivers light recoil.

How do you judge how well a compensator works? I mean, I can certainly tell you how it feels, and I will, but how do you judge raw performance? Well, the closest thing I can figure out is to use the Mantis X10 device. It has a “RecoilMeter” that tracks gun movements throughout a shot. I tested the recoil of the Mk17 with a bare barrel and with the weapon equipped with the Lithium PCC.

Without the Lithium, the Mk17 had a muzzle rise of .62 degrees. Not bad by any means. The CMMG’s radial delayed system does a great job of reducing recoil and muzzle rise in general. After properly assembling the Lithium onto the Mk17, the muzzle rise went down to .24.

I used the same ammo, the same magazine, the same everything. The Mantis did not move between shots. Man, the Lithium did a fantastic job of cutting down recoil, and the numbers don’t lie.

The Ultradyne Lithium in Action

I set up a number of my favorite drills and ran them hard with the Lithium-equipped Mk17. I warmed up with box drills and moved into the VTAC 1-5 drills, reload drills, and even shot the old OPOTA SMG qual with the gun. Hot damn, did I see a noticeable difference to the point where I was a little slower than I needed to be. It took a warm-up for me to get used to the effects of the Lithium.

The big device makes a big difference. It’s notably a stiller weapon. Judging by the movement of my red dot, the recoil is cut significantly. Watching that dot move even less on a gun where the dot already barely moves. Strings of rapid-fire are much easier to control. The Lithium uses two side ports to reduce recoil and four top ports to reduce muzzle rise.

I had zero issues with reliability. Easy with lower-powered ammunition. The Mk17 ate everything as always without complaint or issue. The Lithium won’t impair your gun’s ability to run ragged.

The ports certainly do their job and reduce both muzzle rise and recoil. The effect on muzzle rise is most noticeable. While lots of people may use something like this for speed, the device does a great job of improving practical accuracy.

When I say practical accuracy, I don’t mean the device will tighten your groups up necessarily. A reduction in muzzle rise allows you to stay on target between shots. At 50 yards hitting a four-inch isn’t hard, but doing so quickly can be. A moving gong and a red dot moving between shots create the challenge. When we eliminate or at least minimize the dot’s movement, we can just account for the gong swinging, and that makes laying accurate round down much easier.

The Lithium compensator does just that. I can focus less on recovering from recoil and more on hitting the slightly moving target. Small targets and PCCs are really more of a competitive game, but hey, you never know when it will translate over to the real world.

In the spirit of no free lunch, everything you do with a gun is a trade-off. With the Ultradyne Lithium, the trade off’s aren’t huge. First, your gun will be a fair bit louder. That’s the nature of brakes on firearms. Not too big of a deal, but worth noting.

Second, you do add about 1.5 inches of length to your gun. That can be considered a bad thing when you’re using a gun as small as the Mk17 Banshee. However, it might be worthwhile on a dedicated 14.5-inch barrel. You can pin and weld it to keep it at 16 inches with a muzzle device.

The Lithium isn’t a small device, but big effects come from big devices. It’s certainly beastly in size, but a little thickness never hurt anyone. The overall effects are by the numbers provable, and the reduction in muzzle rise and recoil can be easily felt. I think Ultradyne has done a bang-up job with the Lithium.

If you are looking to get into PCC competition, then the Ultradyne Lithium should be on your shortlist of awesome products. If you want to add an edge to your home defense PCC or subgun, then ditto. It’s a rock-solid piece of gear that installs easily and performs admirably. 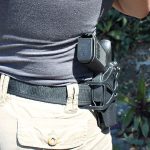 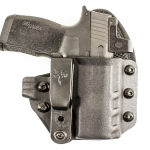