When I saw the compact size of the Tippmann Arms M4-22 Micro Pistol in the gunshop, it had my full attention. I mean, this thing is small!! It has a collapsible pistol brace, and if that’s not short enough for you, the brace actually folds to the side! We are talking seriously compact; it will very easily fit into a day pack with room to spare.

And that is what attracted me to it—the ability to throw it in a backpack. It would be especially useful for hiking in the backcountry to have a compact firearm along without anyone knowing about it (unless you wanted them to).

Another thing I liked is that it’s chambered in .22LR. Many people fail to take the .22 Long Rifle very seriously, but it certainly can perform a number of jobs. Poachers love it because it’s relatively quiet and can take game at close range with good shot placement. You can carry a lot of rounds, too. It would be nothing to throw a couple hundred rounds into that day pack and go hiking for the day, secure in the knowledge that you have a nice ammo stash along for the ride.

Another huge asset is that the .22 is not very loud, so shooting is more pleasant. And of course, it doesn’t recoil much at all, it’s barely perceivable. And right now, .22LR ammo is far cheaper than any other caliber out there, so you can do a lot of shooting for a reasonable price.

The overall weight is 4.4 pounds. Despite how light it is, the little AR feels solid. It should, considering it’s made from Aluminum. Despite the fact that it’s chambered in .22LR, it feels like you’re holding a standard AR-15. Here’s a closer look at all of the features.

The seven-inch barrel is made of 4150 solid steel and the gun has a 5.5-inch M-Lok Handguard. The barrel is not exactly heavy, but neither is it pencil-thin, so it has a nice heft. The muzzle is threaded for a 1/2×28 A2 birdcage flash suppressor, so any muzzle device that will fit regular ARs will also fit this one, allowing the user to tailor this pistol as he wishes.

A nice touch is that all of the controls you’d find on a “regular” AR are also on the Tippmann. The bolt release, magazine release, safety, charging handle, and even the forward assist all function exactly as they do on a standard AR-15. That makes the gun really nice for training because the controls translate perfectly to its full-size cousins. I’m told that aftermarket trigger groups will also fit the Tippmann (although I cannot verify this firsthand, as I did not drop in any trigger groups myself).

There is a full-length Picatinny rail on top, and the pistol comes complete with front and rear flip-up “iron” sights. These sights look very similar to those manufactured by Magpul. The sights are excellent and easy to adjust to get on target. When not in use, they fold down to protect them from damage and make storage easier. They’re easy to use, as AR sights are. One neat aspect is that there is a small, fold-down aperture in the rear sight, so if you want a smaller aperture, leave the aperture in place. If you want a ghost ring type, fold the little aperture tab down, which opens up the aperture to a larger opening. Very ingenious!

The bolt is very simple, and field stripping is a breeze. Just remove the pin in the lower receiver as on a regular AR and tip the receiver up. Then, withdraw the charging handle, which brings the bolt out of the upper receiver. To clean, wipe down and lube the bolt, clean the barrel and chamber area, and you’re done. That’s it, there’s nothing else to do. The bolt is nickel-plated, which simplifies cleaning.

I mentioned that there is a pistol brace on this pistol. It is set up very nicely with four notches so it can be adjusted to four different lengths. It will also fold directly to the side of the pistol, adding to the compactness. Major kudos to Tippmann Arms for the design on this!

The magazines for the Tippmann are a marvel in and of themselves. Outwardly they resemble standard AR-15 magazines so it’s difficult to distinguish the two from each other. There’s a small tab that you push in the upper corner, which allows the user to pull the top portion of the magazine up, exposing the guts. The magazine can now be loaded by pulling two tabs down, which compresses the spring, making it very easy to feed the bullets into the magazine. After it’s full, just push the guts back down into the magazine body and you have what appears to be a standard AR mag again. The magazines are surprisingly robust, too. They can be had from most places for about $25 each, making them a very reasonable buy.

As an added bonus, these magazines insert and extract exactly as they would on a normal AR-15. And since their dimensions mirror those of standard AR mags, they will fit in all mag pouches, facilitating training.

With great glee and excitement, I retired to the range with my new toy to see how it would fare. Initially, the sights were pretty far off at 25 yards, so I took some time to adjust them and get it zeroed. It wasn’t long before it was perfectly zeroed and we were off to the races.

I had several brands of ammunition with me, as I wanted to see how the Tippmann functioned with a cross-section of .22 LR rounds. I started off with Aguila, which has proven to be a great shooter in my Ruger .22 firearms. Unfortunately, the Aguila would not reliably feed all the time in the M4-22, so I had to stop using it.

I then switched to Armscor and that was even worse. It absolutely refused to feed the little Tippmann.

I spent a goodly amount of time trying out the various rounds, and it was frustrating that it would not feed everything. To be honest, my Ruger 10/22s and MK IV have me spoiled, as they have fed every type of .22 ammo that I could stuff into them with supreme reliability. Granted, when the M4-22 worked, it worked beautifully. However, the lack of reliability compared to that of my other .22 firearms was intensely frustrating. After all the hype that I’d read about this pistol being so reliable, this aspect was the fly in the ointment, as my expectations were dashed.

As for how the M4-22 Micro Pistol handled, it was an absolute dream! Being so compact, it was perfect for close-range engagements and the maneuverability made it a real pleasure to use! Of course, there was virtually no recoil because of the .22 LR caliber being used.

Once it was zeroed in, the M4-22 was extremely accurate for a pistol. Groups at 25 yards came in at around one inch consistently. At 50 yards, they were around three inches. However, I’m convinced that the groups would have been smaller if my eyes were not aging as they are and perhaps an optic was used. Suffice to say that this pistol is more accurate than I am and I don’t think any of our viewing audience will be disappointed in that department.

Because this AR feels and acts like a standard AR, it is especially useful for training purposes. Overall, the Tippmann Arms M4-22 Micro Pistol is a very neat firearm that allows the user to train as if he had a standard AR-15 in his hands (minus a slight amount of recoil) because the controls and feel are exactly the same as a standard AR-15. That training will be far cheaper using .22 LR than with .223/5.56mm also.

The cool factor of the Tippmann Arms pistol is off the charts. The side-folding, telescoping pistol brace contributes to it’s excellent handling characteristics as well as the ability to take it places where a rifle could not go unnoticed.

Now, if they could just get it to function 100% with varied ammo, it would be a slice of heaven. If you can get past the ammo sensitivity, this might be the perfect small firearm for you. For me, it was a tough decision. I decided not to keep the Tippmann despite the cool factor, because, frankly, I have other .22LR semi-autos that feed any ammo that I run through them. MSRP at the time of this writing is $649.95, but they can be found on gun shop shelves for considerably less — mine was under the $600.00 mark. 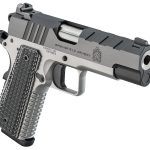 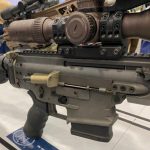