Tisas, the Tennessee-based purveyor of 1911 variants, has expanded its Duty Rail line of single stack 1911 pistols to include the Raider model. The Raider version of the Duty Rail 1911 is a faithful reproduction of the M45A1 service sidearm used by the Marine Corp Special Operations folks around the world, according to Tisas.

The Tisas 1911 Raider is a .45 ACP pistol, like the other 1911s, featuring a 5” cold hammer forged barrel with a matte stainless barrel bushing and recoil spring plug. The pistol features Colt Series 70 internals with a titanium firing pin.

The slide is government length and has been constructed from forged carbon steel, along with the full-sized forged carbon steel frame that features a 1913 Pic rail. Additionally, the slide features front and rear serrations for better manipulations. On the top of the slide is a Novak three-dot pattern sight set up with a skeletonized hammer on the back.

The full-sized grips feature an undercut trigger guard and a beavertail grip safety for secure handling of the weapon. Inside that trigger guard sits the sold black trigger. The grips are G10 black and flat dark earth (FDE) pattern with the 25 LPI checkering along and lanyard loop on the flat mainspring housing. To round out the frame is an improved ambidextrous thumb safety. 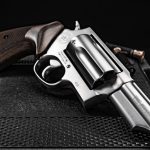