What’s the secret to how to reload an AK fast? Let’s spend a few minutes with Travis Haley to hear his views on changing magazines for the AK-47. This is a short video, just over five minutes long, so it won’t take too much of your time. In the video, you’ll find some fundamental principles for efficiently changing your AK magazines.

Why do people love their AKs so much?

As we know, the AK series has become extremely popular here in America, and for good reason.  The rifles and ammo were available, at one point, for insanely reasonable prices. Now that the ammo madness has settled slightly (at the time of this writing, although who knows what tomorrow holds), 7.62x39mm ammo is once again among the least expensive of the rifle rounds.

Aside from the economic price, the AK is legendary for its reliability, which is usually the very first attribute cited by its fans. In case you’re wondering, yes, I’m a fan and yes, I do like that reliability factor quite a bit.

Other factors that are attractive include moderate recoil and decent stopping power from a .30 caliber cartridge (or 5.45 for the AK-74).

If the AK is popular in America, it is standard issue in Middle Eastern countries. For those who operate in that region, it’s a good idea to have an intimate knowledge of this weapons system, which is preferred by our enemies. You never know when you may have to pick up an AK as a battlefield pickup.

How can you get better and faster at changing your AK magazines?

Back to the original question, what’s the secret to reloading an AK, fast? Travis answers the question right away with the statement, “Here’s the secret: there is no secret.”

Instead, it takes deliberate practice and minimizing excessive motions that waste time. I agree. The best thing we can do is find sound techniques that work, and then practice the hell out of them. Travis advocates a couple of concepts for training:

There there are many methods for how to load/reload the AK, the “Iraqi Reload,” the “Russian POI Reload,” and the “Thumb Reload,” to name a few. Travis likes to find the one with the least amount of steps. Again, I agree completely, being a fan of the KISS principle (Keep It Simple, Stupid).

In keeping with this idea, he chooses the Thumb Reload method.

To practice this reloading method, Travis suggests beginning with an empty magazine in the gun and one round in the chamber, with a full, spare magazine in a pouch on the side. (Obviously, this needs to happen on a shooting range).

To begin training, Travis tells us to begin slowly and use a five-second count so the movements are not rushed, but done properly. Here are the steps:

From there, he instructs us to continue our deliberate practice by keeping our feet set and our focus strong.

For the tactical reload, Travis does not bring the weapon to his shoulder. He accesses the full magazine with his left hand and uses that same hand to eject the magazine from the weapon. Since this is a tactical reload and not a speed reload, he holds onto the magazine he just ejected because it still has ammo in it. And, this is not an emergency, so he is reloading at his descretion, not because the magazine is empty.

As his practice progresses with several repetitions, Travis reduces the time — usually by about one second. Eventually, this process will become subconscious, just like any other weapon handling procedures that you practice.

Travis cautions against overextending your left arm out too far when ejecting the magazine. It is a complete waste of time and energy. The arm is extended almost straight out and then it has to come all the way back to the magazine well of the rifle, which costs valuable time.

Remember, there isn’t a secret to getting better and faster. Just hard work. Try out Travis’ deliberate practice for reloading AK magazines and let us know how it goes! 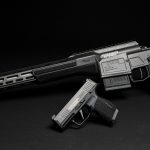