“Violent Night” is the latest in a seemingly growing series of Santa-Claus-is-a-badass movies. We had “Fatman” a few years back, starring a grizzled Mel Gibson as Santa Claus. This year we have David Harbour playing a disgruntled Santa Claus who spends Christmas night getting hammered and haphazardly delivering presents. The movie harkens back to classic Christmas movies like “Die Hard.”

Santa is delivering presents to the ‘Lightstone’ mansion. The Lightstone family is crazy rich; like billionaires-insulting-senators rich. The family is full of strife, and most of them are comedic actors. Edi Patterson is fantastic as Alva, the suck-up sister, with her husband Morgan Steele played hilariously by Cam Gigandet. Beverly D’Angelo plays Gertrude Lightstone, the matriarch with balls of steel.

On the flip side, we have Jason and Linda, an estranged couple trying to give their only daughter, Trudy, a nice Christmas. They are barely putting up with each other when an international team of terrorists takes them hostage, led by Mr. Scrooger, aka John Leguizamo. His team kills their staff and security while Santa is delivering presents. After Santa’s Reindeer are scared by gunfire, he’s stuck in the mansion with the hostage and terrorists.

The movie is a bit of a dark comedy, and as it progresses, Santa is pushed to his limits. He begins a bit cowardly and tries to escape and mind his own business, but Trudy is a true believer, and he stays for her. This movie is ultraviolet, and it’s chock full of blood, guns, and Christmas-themed violence.

The plot is fairly simple and formulaic. You’ll know the ending and the fates of most of the characters at a glance. That’s not why we are coming to see this film. People are watching “Violent Night” to see Santa kill a man, a Christmas star, or use a tinsel garrote, and you get plenty of that.

We get glimpses of Santa’s past, and he was a warrior who wielded a hammer called Skull Crusher. This later leads to an extended, and I mean very extended, violent scene of Santa wielding a sledgehammer alongside a snow blower, a set of skates, and more.

Santa himself never grabs a gun, but he faces nothing but heavily armed threats. Much like “Die Hard,” he chews through most of them one at a time. The mansion and grounds are big enough that he gets enough one-on-one face time to take them down with ease. The film gets very creative with its kills and violence, and it’s hilariously over the top.

If you’re looking for some revolutionary commentary on Christmas with a subtle commentary on modern politics, this isn’t for you. It’s just a fun and entertaining movie with a pretty solid cast. The cast gets room to breathe between Harbour, Leguizamo, and D’Angelo. Everyone gets some kind of scene with levity and a chance to shine.

The film does have some heart and clearly makes references to older Christmas movies. The aptest comparison is “Die Hard.” After seeing “Home Alone,” our sweet Trudy makes some traps that are violent enough that she even racks a kill, even if it wasn’t intended.

Santa has magic but isn’t a superhero. He bleeds and gets his ass kicked. He sews himself up, and it’s really Trudy and her belief in him that keeps him going. I love that the movie doesn’t try to explain Christmas magic. Santa says numerous times he doesn’t really know how it works, it just does, and it works when it’s needed. The naughty and nice list is a great way for Santa to know who is who and how to deal with them.

This keeps the movie light and movie without a silly exposition dump. In fact, it’s almost entirely exposition dump-free. Santa is Santa, and he has a bad history. The bad guy has a bad Christmas experience, and the mercenaries are one-note characters who are there to die. Although, to their credit, a few get some good jokes in.

While it’s violent and bloody, the movie does hit some standard Christmas themes, like believing in Santa and uniting a clearly broken family in more ways than one. The estranged couple gets back together, but the family as a whole is tighter, even though they all seemingly hated each other in the beginning. It’s a Christmas movie for adults.

Obviously, the guns deserve mention, and there are a fair number of them throughout the film. The main bad guy firearms of the bad guys are two rifles, the HK 416D and what appears to be a Troy PDW-style rifle. These highly trained mercs seem to wave the PDW around like a wand of death and the stock is never deployed, but the bad guys armed with HK 416 rifles seem to use the stocks and red dots. Speaking of, those red dots all seem to be the Aimpoint Comp M4s.

Later on, we see an armed unit arrive carrying a variety of different AR-type rifles, as well as an M240. The commander of this unit carries a Beretta 92FS, aka “The Official Gun of Christmas.” The bad guy’s sidearm of choice is the very interesting Grand Power X-Calibur. Kind of interesting to see a fairly odd weapon make its way to the big screen.

Harbour takes all these guns on with a sledgehammer and a pair of sharpened skates because Santa can brawl.

“Violent Night” is a fun flick in a new but increasingly familiar violent Santa Claus trope. David Harbour steals the show as a very believable and gruff Santa. It’s a great flick to kick off the holiday season. It’s bound to become a cult classic, and we’ll likely get a sequel. Maybe in the next one, we can see his beloved Ms. Clause and Santa using Skull Crusher.

Any other fans of violent Christmas movies? Can we get a gritty Yukon Cornelius film where we see him use that Colt 45 a time or two? 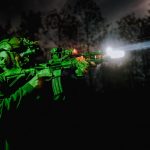 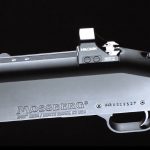