Lasers might seem to be best left to the realm of semi-auto shooters, but they have uses on revolvers, too. Viridian understands this, which is why they offer lasers like the E-Series for the Heritage 22. The fact that there’s no accessory rail is just fine thanks to the company’s trigger-guard-mounted technology. After all, point of aim and point of impact matter on revolvers, too.

The E-series line is perhaps Viridian’s most iconic laser sight, and it’s not just for semi-autos. This specific model is designed to fit the Rough Rider revolvers from Heritage. The use of a laser is well worth considering for your daily carry, and according to the manufacturer, this is the most powerful laser legally available on the market. This laser is made to deliver superior precision and fantastic visibility, so shooters can be confident in their aim.

What makes this laser great is the unique design that makes it easily fit onto the revolver’s trigger guard. Viridian created it to hold up to tough conditions and last quite a while, thanks to 6 or more hours of battery life. This model of laser features an ambidextrous on/off switch that also has a 5 min auto shut-off. It can be quickly mounted to the revolver using the tools included in the package. This laser is adjustable for windage and elevation, so the shooter can zero it on target as needed.

As for the gun itself, the Heritage .22 Single-Action Revolver is made with a secure cylinder lock-up and is chambered for either .22LR and .22 Magnum cartridges. It’s a versatile option for plinking or shooting pests and varmints.

This E-series red laser is backed by Viridian’s excellent 7-year warranty. And, of course, it’s custom designed to fit the Heritage .22 Single-Action Revolver.

Viridian President and CEO, Brian Hedeen said, “We’re bringing the thrill of the Heritage .22 to the next level with the Red E SERIES™ laser sight. Combining the old-fashioned feel of a revolver, with the most powerful red laser legally available, is a gamechanger and enhances the user experience. This has been a long time coming, we are proud of just how much fun our accessory adds.”

In addition to the E-series red laser for the Heritage 22, Viridian makes a number of lasers for semi-automatic handguns. So whether you have a revolver or a semi-auto, there’s a laser in their lineup for you. Don’t allow yourself to be limited by your revolver’s lack of an accessory rail. Get an E-series laser from Viridian that mounts directly to the trigger guard, and up your accuracy game. 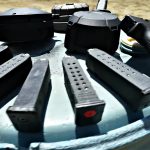