Hunting USA > Blog > Accessories > What is It and How Does it Work?

By now, you’ve probably heard of the Rare Breed FRT-15 Trigger https://albertanails.com/slot-online/, if only because of the company’s coming fight with the Feds over the attempt to brand the trigger a “machine gun.” If you haven’t heard about that mess, we have a separate follow-up article on the way to break it down. For now, though, let’s look at exactly what the FRT-15 trigger is and what it does. If you already know this stuff, you’re excused and can go to recess early. If not, read on.

The “15” part means that it’s designed for the AR-15 platform chambered in 5.56 NATO or .300 Blackout. It won’t work in AKs, SCARs, or anything else. Its function is dependent on the design of the MILSPEC AR bolt carrier.

It MAY work in an AR-9, depending on how the gun is set up. An FRT-9 (for AR-9s) and FRT-10 (for AR-10s) are in the works but not yet ready for manufacture. Rare Breed says that the FRT-15 will NOT work in an AR chambered in .22 Long Rifle, but I saw a guy who had one tuned to 80 to 90 percent reliability on YouTube. You decide for yourself, but when the manufacturer warns against it…

Rare Breed is careful to point out that the FRT-15 may require some tuning to any gun in which it’s installed. “Tuning,” in this case, refers to gassing and making sure you have the proper buffer and bolt carrier. More on that in a minute.

The term “forced reset” is an accurate descriptor of how the trigger works. Your standard AR trigger resets when the shooter releases rearward pressure, thus allowing the trigger mechanism to move forward, whereupon another press of the trigger starts the whole process over. Like you didn’t know that.

The FRT-15 uses a newly designed hammer that, as it is cocked by the bolt carrier, forces the trigger forward to the reset, along with the shooter’s finger, as the bolt moves forward to chamber the next round. A locking bar prevents the trigger from being pressed again until the bolt cycle is complete. By maintaining pressure on the trigger, the shooter can take advantage of the hammer-assisted reset to dramatically increase the rate of fire. Or not. Based on what I have seen, with some practice, the shooter can manipulate the trigger to fire only one shot or the equivalent of a short burst.

Keep in mind that the locking bar’s pressure on the trigger prevents another press until the bolt cycles. Indeed, it is the completion of the bolt cycle that releases the locking bar. Between the hammer and the locking bar, the shooter cannot simply hold the trigger to the rear. It must execute its function for each round fired. So, while the FRT-15 is capable of a prodigious rate of fire, it is still a semi-automatic trigger.

Now, back to the part about tuning your gun so the FRT-15 operates properly.

Here’s what Lawrence DeMonico, Rare Breed’s president, has to say about it:

Are there any problems with the Rare Breed trigger?

If you’re researching the FRT-15, you may run across some folks who have had problems with the locking bar spring. There was an issue caused by stacking tolerances in some ARs, which resulted in the spring kinking when the locking bar traveled further than it was designed to. Rare Breed addressed the problem by modifying the housing. All FRT-15s shipped on or after 1 March 2021 have the modified housing, thus fixing the problem that some people had. Those with a trigger from before that time were provided with a modified locking bar which also solves the problem.

I saw several people who addressed the problem on their own with homebrew modifications and fixes. Some worked better than others. Do what you want, but it looks to me like Rare Breed has addressed the problem and will take care of anyone who has experienced it. Keep in mind that these folks are only a small fraction of those who bought the trigger, so, while it is a problem, it is not widespread and appears to have been fixed. I offer this more as a PSA than anything. I have no personal skin in the game when it comes to Rare Breed, but the problem with the locking bar spring came to my attention and they seem to have handled it conscientiously.

Having said that, the vast majority of customers have had zero issues with the trigger. While researching, I found a lot more people who loved it than people who didn’t. And many of the folks who had the locking bar problem either fixed it themselves or let Rare Breed do it for them, resulting in the happy face.

All-in-all, the FRT-15 looks like a helluva lot of fun. But, as you might expect, the ability to achieve that higher rate of fire comes with some trade-offs. Accuracy is number one. If you think you’re gonna roll out there and drive tacks with this thing…well, you’re not. Depending on your range to target, you’ll be doing well to score a  hit 50 percent of the time. You’re gonna have to practice. A LOT. Which brings us to the second point, this thing burns through the ammo. If you have it to burn, then good on ya. But it will take some time and some ammo to get the accuracy you want. Or should want. Finally, if you want to fire one round at a time, you will have to practice that too. I saw some guys who had gotten it down, but they had to put in the work.

Rare Breed has sold tens of thousands of these triggers and I’m glad to hear that. Glad to hear that someone’s innovation and hard work paid off. Glad that shooters who want a product like that can get it and, hopefully, benefit from it. Glad the company is backing up its product the right way. But, as I mentioned earlier, the AFT (snicker) is trying to throw cold water on everyone’s fun. More on that soon. Hopefully, my editor will insert a link to that article HERE when it becomes available. 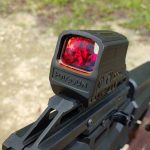 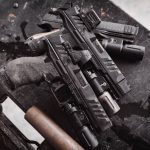