5.7×28 has been around for years, thanks to FN. Even so, some people are just now discovering it thanks to some newer products from CMMG, like the CMMG Banshee. The gent over on the VSO Gun Channel thinks you should take a good look at the 5.7×28 and even stacked it up against the ever-popular 5.56×45 in a short barrel configuration. He addressed the round and explains why you should give it a go if you haven’t already.

It was designed for the FN P90 rifle with fast-burning powder, but lots of people do not enjoy the stick magazine that goes with the P90. With the release of the CMMG 5.7 magazine, it allows your AR rifle to shoot 5.7 — with a 5.7 upper, that is. But how would the 5.7 compare to the 5.56?

VSO really wanted to compare the .22lr, 5.7×28, and the 5.56×45 as the 5.7 falls in the middle. Ultimately, he excluded the .22lr round because it’s a non-combat rimfire round, even though commenters of the videos say that .22Mag or 9mm would be a better comparison. VSO goes on to say that .22lr is outdated and has been riddled with reliability issues throughout the years. The 5.7×28 round is a centerfire cartridge that has a higher quality projectile as well.

The magazines from CMMG have the same general appearance as an AR mag, but hold 40 rounds of 5.7×28 ammo. They have a small texture on the front of the mag and hold the bolt open on the last round but don’t fall free. Then why would you want to run them in an AR? It essentially comes down to the fact that with the CMMG upper, it is more compact and lighter than its 5.56×45 counterpart—including the suppressor. When you throw in having a lower papered as an SBR (short-barreled rifle for those that don’t know), having the upper adds to the overall latitude of configuration options for the firearm, including full auto if applicable.

The 5.7 round has a reputation of being one that screams. The cartridges are designed to shoot out of the short barrel and CMMG has options for either a 5” or 8” barrel length. VSO decided to use barrel lengths that were similar for the 5.56 and the 5.7. Whether or not it’s obvious, the suppressors are different. The 5.7 round can be shot through a smaller rimfire suppressor (in most cases) whereas the 5.56 would need a rifle suppressor.

VSO compared the two rounds during the day and the night. The night testing showed the light signature of both the 5.56 and the 5.7 was significantly lower when shot suppressed vs not suppressed. However, the 5.7 had far less signature in both applications. Then he did something that was either brave or idiotic when he shot two rounds of 5.56 through his Bowers USS .22lr suppressor. Thankfully nothing crazy happened.

In short, the 5.7×28 is a great compact option and even a majority of the commentators of the video agreed. Even so, he’ll probably stay with the 5.56×45 as his primary option. 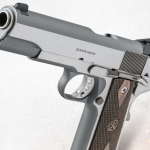 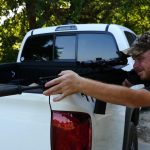