The two main reasons I bought a Steyr AUG are that it’s not an AR-15, and, well, I like weird guns. Seriously, aren’t we all just a bit bored with the AR-15? I know, I know, the AR-15 platform is hands down the best auto-loading rifle ever designed. I get that, but I am still bored with it. Even a mid-range AR-15 is better than the AUG in almost every measurable way, but “better” doesn’t always matter.

Before I go over the rest of the reasons why I bought an AUG I want to go over why you shouldn’t buy one. Customizing an AUG is expensive and you only have a few options. The rail space is very limited in its factory configuration. If you want to mount much more than an optic and a light you are going to have issues. The trigger isn’t nearly as bad as people say (how’s that for damning with faint praise?). It’s bad but it’s not horrible. One word can accurately summarize the AUG trigger: vague.

The fire control group is plastic; even the hammer. In reality a plastic hammer is completely fine and will last longer than a barrel, but I would prefer a metal hammer and sear engagement. Aftermarket trigger options are very limited. The AUG’s sling attachments are in weird spots. The front sling mount interferes with the charging handle and optic. The rear one is the same pin that holds the rear of the rifle together. It’s fine, but I still don’t like it. The AUG, as equipped from the factory, doesn’t suppress well. The barrel is threaded 13×1 LH which means you will need an adapter to use common suppressor or muzzle devices. Not a big deal but it’s worth mentioning. Assuming the sling is not in the way and you use the charging handle, there is a fair chance you will cut your fingers on the top rail. If you use a scope mount you better use one that is pretty thin on the charging handle side of the rifle.

If you don’t, you will hit your hand on the mount when charging the rifle. Several manufacturers make replacement changing handles and I will certainly be replacing mine. Magazine changes are awkward and slow. The mag release button is perfectly usable, but it’s a lot slower than an AR-15 or similar rifle. AUGs are comfortable, the stock is just about perfect, and it points very quickly. The integrated foregrip, which folds, is equally comfortable. However, the foregrip is integrated to the barrel assembly so if you want to replace it you will need an aftermarket handguard. The quick change barrel feature is pretty cool, but in reality I don’t think many people actually use this feature often. Honestly, I can’t think of many practical reasons to buy an AUG other than its compact size and even then, the Tavor is about an inch shorter.

The #1 reason I bought an AUG…I found one in stock at a reasonable price. Yet even with it’s many flaws, I still love it. For some reason. 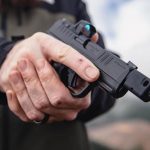 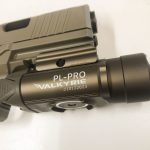