When someone says AK or Kalashnikov, we can all picture that rifle in our minds. It’s that universal. The AK12 from Kalashnikov, used by the Russian military, is not far off either. The gents over at Ultimate Weapons and Gun Breakers give some good background as well as abuse testing to see how it stacks up to its predecessor.

The AK12, in case you didn’t know, is one of the latest iterations from the Kalashnikov Group chambered in 5.45×39. It’s essentially the updated and modern version of the AK47. The AK12 came to be in 2011 by the Izhmash factory for the RATNIK trial by the Russian Army. After those trials, it was further developed by the Kalashnikov Group and received modifications and changes so that the rifle would meet military needs.

With a cyclic rate of 700 rounds a minute, this 415mm barreled rifle has a maximum range of 800 meters. The rifle also comes with standard 30 round magazines that have windows to help see the number of rounds left in the mag. Not only do they work with AK12 mags, but they are also compatible with AK74 magazines. To round out the features of the AK12, it has an adjustable stock, a large firing selector, and a cleaning kit tucked into the grip.

But how does the AK12 hold up to abuse? Well, Georgiy Gubich, a Kalashnikov specialist at Gun Busters, took on the challenge. In full protection gear that includes a flack vest, they started out with 1,000 rounds of ammunition, stacks of 30 round magazines and proceeded to do mag dumps in full auto.

Georgiy runs magazine after magazine, not letting the rifle cool down. He notes the presence of smoke that doesn’t dissipate at 180 rounds. After shooting a constant 480 rounds, he notes the strong smell of plastic with the smoke still emanating from the rifle. When he hits the 510 round mark, there are visible flames coming out of the handguard, but he notes that there is no change in the rate of fire. Larger flames and muzzle flames start showing up around the 570 round mark. Once the rifle reaches the 620 round mark, Georgiy quips that he’s gone blind and then subsequently deaf after the 650 round mark. The barrel burst and is on fire at the 680 round mark, thus ending the abuse test.

Georgiy then extinguishes the flames and cools down the rifle to get a better look at it. He says that having a burst barrel is common in 5.45 or 5.56 rifles because of the thermal expansion which causes the bore to get tighter and slows down the bullets. The pressure shock happens and the barrel breaks at the stress point. Even with all the fire present in the test, the bolt and carrier are unchanged along with the muzzle brake.

Overall, the rifle withstood 680 rounds in rapid succession, which is three times the number required by the Ministry of Defense for the rifle. Not only that, but that number is 100 rounds higher than what the AK74 stood up to. Looks like the Russian military has a solid gun to work with.

Want to watch the overview video for yourself? Check out the Ultimate Weapon video here:

But if you want to see an AK12 catch on fire and ultimately burst, check out this one from the Kalashnikov Group: 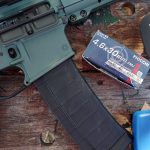 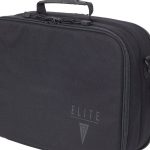