Black Collar Arms announced a brand-new product line they have been developing, the SBDs. The SBDs are a line of products that are all integrally suppressed firearms. For this project, Black Collar Arms partnered with AB Suppressors. The product line was a culmination of extensive testing and development for both companies.

The products of the SBD line are reported to be compact, lightweight and accurate, and highly capable. According to Black Collar Arms, they are some of the quietest centerfire rifle caliber products ever made. The SBD products include options for the rifle, modular integral pistol, and modular SBR.

The rifle has a standard 16.25” barrel with a permanently installed all-titanium integral suppressor, thus making it a one-NFA stamp firearm. For the rifle, there are two different builds to choose from. The first is the Pork Sword Chassis with a folding stock and an SD handguard. This option weighs in at under 7 lbs. The other option for the rifle is the Grayboe Ridgeback stock with a Grayboe DBM and weighs just under 8.5 lbs.

The Rifle is said to be an insanely quiet package with the suppressor being a part of the legal barrel length. When the stock option is folded, the package is only 27” long. The rifle comes in caliber choices of 300 Blackout, 308 Winchester, 6.5 Creedmoor, or 375 Raptor.

The Modular Integral Pistol is only available in 300 Blackout with a 6.5” 1:5 twist barrel from X- Caliber. This version also comes in the Pork Sword Chassis. The rear is made to accept a Picatinny rail compatible pistol brace, if that’s your thing.

The AB Suppressor is a Raptor 7.62 with a 5” Reflex mount that is 5/8×24 flush mounted to the barrel and is removable, meaning you can swap it around on your other compatible firearms. You can choose between 6 or 8 baffles for the suppressor. This gun also is a one-stamp gun (for the suppressor), unless you go for the SBR option (that requires a Form 1). The total package weighs just around 5 lbs.

The Modular SBR is similar to the pistol version with the 6.5” barrel chambered in 300 Blackout. It comes from the factory with the SBR folding stock option installed. This version is a two-stamp firearm (one for the SBR and one for the suppressor). 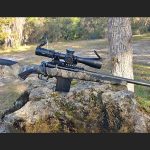 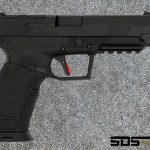