Everyone loves a good .22. Everyone. Yes, even you. But let’s be honest, it seems like it’s all been done. Maybe so, but the guys at Smith & Wesson have something that might pique your interest. The M&P 15-22 pistol is a slick little package that is not only fun to shoot but could help with your training if you’re so inclined.

Allen at Olde English Outfitter breaks down the S&W M&P 15-22 pistol for us.

As Allen notes, the AR platform has kind of taken over the US market, and with good reason:

All that adds up to a popular platform that almost any shooter can find a use for. One of those uses is training. ARs chambered in .22 long rifle are nothing new, but many of those rifles don’t feature fully functional controls, so while they’re fun to shoot, they don’t help much with mechanics and muscle memory. Not so the M&P 15-22 Pistol.

The controls are identical to a standard AR-15 with a functional mag release, charging handle, bolt catch, and 90-degree two-position safety lever. The only thing missing is a forward assist, and I think we can live without that since the gun doesn’t need one.

So, as Allen points out, you can use this gun just like your AR-15 but not shoot up that still-expensive centerfire ammo. Just make certain, as I know you will, to get high-velocity ammo to cycle the action.

The gun is lightweight, with polymer receivers, though the barrel, bolt, bolt carrier, and trigger group are steel. The gun features a blowback action with the recoil spring on the bolt carrier. The gun obviously doesn’t need a buffer tube, being a .22.

Basic disassembly is similar to an AR-15, with the two takedown pins, and the bolt carrier slides out the back with the charging handle.

Allen says that he is sometimes asked whether a standard AR-15 upper can be placed on the M&P 15-22 lower. The answer is NO. The polymer receiver and controls are not meant to handle that kind of pressure and the lower is not capable of accepting a buffer tube.

Not only does the gun offer functional controls and a nice brace, but there are also lots of other nice features:

Before writing this article, I dropped by my favorite gun store and handled one of these. I really liked it. The controls were crisp and, just as advertised—right where I expected them to be. I thought I had all the .22 I was going to get, but I think an S&W M&P 15-22 Pistol just might have my name on it. Might want to check one out for yourself. 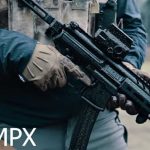 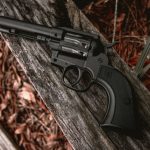