In the last few years, there has been a large influx of new gun owners. A lot of those folks might be looking for some help with pistol shooting fundamentals. Patrick and Chris from Task & Purpose [YouTube channel] also wanted some extra help. While they are both former military, most of their training is with rifles, not pistols and they both feel they lack that same confidence with pistols. Wanting to learn more, they enlist the help of an expert instructor from USCCA to help them with some pistol shooting fundamentals.

First, they go over the basics, including a verbal briefing of the pistol, ammo, and the shooting process. The instructor stresses that once the threat is neutralized, the next threat to yourself is when you reholster your pistol. It is possible to shoot yourself during reholstering and shooting yourself sucks; don’t do it. Look your gun into its holster.

The next principle, and probably the most important for shooting fundamentals in general, is the importance of training how you fight. Most encounters happen between 9-15 feet, 86.2 percent to be exact. That zone is where people should be training.

Their expert stresses that you shouldn’t focus on the target to start with. Rather, start with yourself and then work on getting the shots on the target. Make sure you have a proper base stance, which should include a solid grip on the pistol, trigger and breath control, and a natural point of aim. The typical stance in the industry is a low-ready, but according to the expert in the video, the high compressed ready position reduces arm fatigue and overall stress in your arms.

Additionally, you can shoot from high compressed ready and still probably hit your target. This is referred to as “unsighted fire” and it works because the firearm is held straight on your chest, pointing out, so it will be pointing at your target already. To better understand this idea, think about how you can aim when using a golf club or a baseball bat, neither of which have sights. It’s the same principle.

Chris appreciates how having hands-on, instructor-led training is a good way to improve your shots. Their instructor has them get into a stable base to repel any attack, with their arms out straight and locked, like a triangle. (This advice is debated in the video comments and by other instructors.) Chris notices that the first groups after getting instruction are good, but the following groups aren’t as good. Their instructor explains that repeating drills builds neural pathways so your body remembers. Start slow and steady until it becomes seamless.

In drawing your weapon, start slow and steady to get a good grip, draw and use a biomechanical stop and rotate the weapon on target. Align the center front pad of your index finger with the trigger and press the trigger. The instructor tells them to listen and feel for the trigger to reset after the shot. You need to know your weapon because if you go past the reset, your finger can jerk or slip, and it will mess up your next shot. If you keep your finger placed properly on the trigger, you’ll be able to get more shots off quicker and more accurately.

Watch The Task and Purpose video:

Overall, both Chris and Patrick feel they have benefitted from the course and highly encourage others to get training. In about 15 minutes of hands-on training, they were able to get their shot groups from peppering to a more concise grouping. 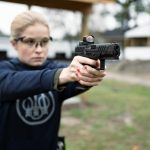