It’s always exciting to see what’s new in the gun world, but there’s definitely an added layer of excitement when the gun in question comes from a popular gun maker like Smith and Wesson. Among their 2022 offerings is the Smith and Wesson CSX, a 9mm handgun that’s generating a lot of buzz. If you’re interested in finding out what the CSX can do, check out this video from the team over at Shooter’s Resource Channel.

What is the Smith and Wesson CSX?

The CSX is an aluminum-alloy pistol with polymer pistol grip inserts. Smith and Wesson designed the backstraps to be interchangeable so shooters can customize the gun’s grip to better fit their hands. It’s chambered in 9mm, has a 12 +1 capacity, and has a micro-sized frame for improved concealability. A 10 +1 capacity magazine is included to further minimize the gun’s profile for concealment. With ambidextrous slide releases and manual safeties, it’s a versatile gun that works well regardless of which hand is your strong side.

What Did Shooter’s Resource Channel Think of the CSX?

Some of Shooter’s Resource Channel’s initial impressions of the Smith and Wesson CSX include the fact that it’s a somewhat heavy gun with a rather stout trigger pull. They are a fan of the steel white dot fights that come standard from the factory and feel the ambidextrous controls are a fantastic feature (we agree).

To find out what else they had to say about the handgun, watch the video:

Overall, the Smith and Wesson CSX seems to be a solid pistol from a respected manufacturer. It should fulfill a niche for concealed carriers looking for a daily carry 9mm with a bit more heft to it, and the way it has interchangeable grips and ambidextrous controls is a huge plus.

More From the Comments Section

YouTubers viewing the video on Shooter’s Resource Channel made some good points about the gun:

RollinOnBBS said, “The trigger should break-in and get smoother, after about 30 days of dry firing with snap caps.” In response to that, Shooter’s Resource Channel said they hoped live-fire would make it an even faster process.

Also, according to RollinOnBBS, “Factory Ruger LCP II HOLSTER is perfect fit. The soft body holster works like a sticky holster for IWB or Pocket carry especially, if you are bigger dude whom wears loose fitting pants with large front pockets.”

MojoMan69 wrote, “A good companion gun if you carry a 2011 like the staccato. But I would wait to see if they will come out with the PC version with maybe a light rail, better trigger and optics ready.”

Are you interested in the Smith and Wesson CSX? Tell us in the comments below. 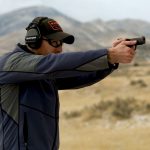 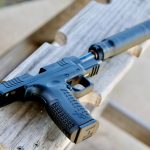