Rarely do we see police training qualifications that successfully cross over to the concealed carry world. Yet, the Massachusetts Municipal Police Training Committee, aka the Notorious MPTC, has a course of fire that works perfectly with civilian concealed carriers. The MPTC Concealed Carry / Back-Up Gun Qual is perfectly suitable for civilian training. We’ll call it the Concealed Carry qual for the sake of brevity.

MPTC designed the Concealed Carry Qual for officers who carry a firearm off duty or were seeking to carry a backup gun. The content involved turns out to be quite applicable to the civilian concealed carrier. This basic qualification is fairly simple and can be a ton of fun at the range. It’s a course of fire you can run dry, or with an air-powered bb gun, or obviously in a live-fire scenario.

Oh boy, so we will need a few things to run this qual. Obviously, you’ll need the basics of shooting, including eyes and ears, as well as a target. MPTC has its own two-sides qualification target you can purchase at Action Target. You can also use any standard man-shaped training target, and the FBI Q is an awesome option for this qual.

You’ll need your gun and concealed carry holster. May I suggest Phlster? You’ll also need a cover garment, as all presentations will be from concealment. You’ll also need 50 rounds of ammunition and two magazines or a speed loader for your revolver and some way to hold an extra reload. Per usual, you’ll need a shot timer or cell phone app with a par timer.

You’ll need something to use for cover because that is a big part of this qual. I used the PTSB Lite, a very handy home range cover barrier. But heck, you can use a pallet, a wall, a big piece of cardboard, or whatever for the Concealed Carry Qual.

One thing to keep in mind is that this qual does have a requirement to yell commands. You can implement this if you’d like, but if you are not a cop, don’t yell that you are. The MPTC qual requires you to scan for additional threats as necessary and to safely reholster. Reholstering is not a timed or evaluated process but should be done safely, and you should look while doing so.

Starting at 7 yards, you’ll need ten rounds total with two magazines. Each magazine will be loaded with five rounds. This drill will be shot in two iterations. Start behind cover. On the command to fire, (or the beeeeep), drop to a knee, draw your weapon, and fire five rounds from the strong side of cover.

Next, reload, scan, and recover to a low-ready standing position. You will repeat this drill one more time, and the only change will be from the support side of cover.

This must be done in 15 seconds from the time the timer beeps until the shooter reloads and stands. Revolver shooters get an extra three seconds, and that’s the norm on the Concealed Carry qual.

Set up your cover five yards from the target and approach the three-yard line. You’ll need two magazines, each loaded with five rounds. On the command to fire, retreat to cover behind the five-yard line, drop to a knee, draw and fire the five rounds strong hand only. Then you’ll reload, scan, and recover to the standing.

You’ll repeat this portion of the Concealed Carry Qual one more time without any changes. You have ten seconds per run.

For this portion of the MPTC Concealed Carry Qual, you’ll start at the five-yard line with your back turned to the target. You’ll need two mags loaded with five rounds each. On the command to fire, the shooter faces the target, draws, and fires five rounds into the target in five seconds.

Then, reload and scan for additional threats. In this drill, we have a second command to fire, and you will fire five additional rounds at your target.

This time we are back at the three-yard line and facing the target. By now, you can likely predict that you’ll need two mags loaded with five rounds. It’s kind of a running theme with the Concealed Carry Qual. Anyway, on the command to fire, you’ll draw and fire the five rounds with your strong hand only, then reload, scan and assume the low ready. This is all done in ten seconds or less.

For the next round, you’ll transition to your non-dominant hand. On the command to fire, you’ll engage with five rounds, then scan and recover. You’ll have ten seconds here too.

At stage 5, you’ll be within the bad-breath range of the target, and this simulates an immediate threat distance. You’ll be one yard from the target. This time you’ll just need five rounds in the gun, no spare magazine. On the command to fire, you’ll do a defensive or distraction tactic. I slap the target and then step rearward while drawing my gun. Fire two rounds into the target strong hand only, and you have four seconds total to achieve this. Scan, and keep the gun drawn.

At the second command, you will fire three rounds as a failure drill into the target. A failure drill is two shots to the chest and a well-aimed shot to the head.

That’s it, and you’re done. You’ve fired 50 rounds and to pass, you’ll need to have hit your target 80% of the time. For my fellow Marines who did Math for Marines, that’s 40 hits. Not too bad.

The MPTC Concealed Carry Qual is fairly easy but also a good bit of training. What makes it easy is the very generous par times. They give you more than enough time to complete each drill. The main way to make this qual harder would be to shave time off the par times.

Other than that, there isn’t much I’d change. I like the fact that there is the use of cover, as well as reloads and practice with single-hand and two-hand shooting. It fits a lot of practice into 50 rounds of ammo. I also like that you occasionally have to re-engage because two, or three, or five rounds isn’t always enough.

The MPTC Concealed Carry Qual is a fun way to spend a day at the range. You can use it to evaluate your own skills and to lay down some lead. For only 50 rounds, you are doing quite a bit of training, and in these times of tight ammo, it’s worth the investment.

What do you think? Let us know below! 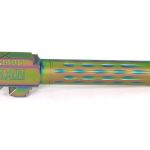