AR-15 platform rifles and pistols are popular for a reason: versatility. With an AR you can defend your life, go hunting, and hit the range for fun plinking. The line of Anderson Manufacturing AM 15 A4 guns is broad enough to cover the platform’s various uses and, perhaps best of all, they are 100 percent American made.

For gun owners interested in a highly portable, compact platform, there’s the AM-15 A4 Pistol. This pistol has a 10.5 barrel made using 4150 chrome moly vanadium with a 1 in 9 twist rate. It ships from the factory with an A2 front sight and folding Magpul rear sight, so it can be fired right out of the box, and it has a receiver-length Picatinny rail for mounting aftermarket optics. It’s chambered in 5.56 NATO and has an overall empty weight of five pounds. An SBA3 pistol stabilizing brace comes standard on every gun.

The AM-15 A4 Rifle has a retro appearance thanks to its fixed stock and A2 front sight. This rifle is chambered in 5.56 NATO and has a 20 inch barrel with a 1 in 8 twist rate. It has an empty weight of 6.5 pounds and a receiver-length Picatinny rail for aftermarket optics. The handguard is an A2 plastic design and the gun ships with sling attachment points so you can easily run this rifle with a sling for stability or carrying purposes.

Part of the lineup is the AM-15 A4 Carbine, which is, at its name implies, a carbine-length gun. It has a 16 inch barrel, an A2 front sight, Magpul rear sight, and telescoping stock. The carbine ships from the factory with a classic bird cage muzzle brake and sling mounts. It has an overall weight of five pounds, empty, a 1 in 8 twist rate, and a 4150 chrome moly vanadium barrel. And, of course, it’s chambered in 5.56 NATO so you can run either 223 Remington or 5.56 NATO through it. This gun’s size is good for closer quarters and scenarios where a shorter profile is preferable for maneuverability as well as a lighter weight.

Fourth in Anderson Manufacturing’s AM-15 A4 Series is the Mid-Length Rifle, a model with a 16-inch barrel and mid-length gas system. This model is chambered in 5.56 NATO. Features include a six-position adjustable butt stock, A2 plastic handguard, and government profile barrel contour. It has an overall empty weight of five pounds and can be further customized using the receiver-length Picatinny rail and sling attachment points.

These four guns cover the most-used bases for AR-platform users, so whether you’re in the market for a pistol, carbine, or rifle, take a look at Anderson Manufacturing’s A4 Series. 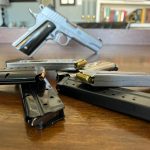 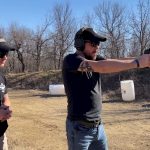