Maxim Defense has upgraded their suppressor line along with their ammunition line to include a .22lr suppressor and frangible ammo in 5.56mm and 9mm. This is a natural progression of their product line that already includes suppressors and other ammunition offerings.

The Maxim Defense DRF suppressor is specifically designed to minimize the increase in cyclic rate and gas blowback of a suppressed weapon system. Primary design features include the significant reduction of sound signature, decreasing flash signature, reduction of recoil, and increasing accuracy.

The DRF:22 Suppressor sports the state-of-the-art MonoKore design that Maxim uses in their other suppressors, complete with the carbon-cutting tube cleaners in the design. The suppressor is a three-piece assembly made of military-grade materials and construction that can be disassembled using common tools.

Light-weight and ideal for pistols, the DRF:22 suppressor is rated for .22LR, .22MAG, and .17HMR loads. It adds only 5.4” to the end of the host weapon, all under 4 ounces. Maxim states that the DRF has no detectable first-round pop and drops sound levels to well below hearing safe levels with a specific reduction based on caliber, host weapon, and weather conditions. Maxim’s average measurement per MILSTD-1474D of 114 dB average with Gemtech subsonic ammunition and 123dB with CCI Minimag ammunition.

According to Maxim, the DRF:22 suppressor decreases flash and recoil and increases accuracy. The suppressor has an MSRP of $439.95.

Newly released for 2022, the Maxim Ammunition Frangible Ammo has been specifically designed with home defense and tactical training in mind. It is compatible for use with their newly released suppressors.

The Maxim frangible ammo is some of the most consistent and accurate in the industry, according to Maxim. Frangible ammo is said to reduce the chance of ricochet and over-penetration and supposedly reduced unintended injury in both training and in-the-field situations. Loaded at Red Mountain Arsenal, LLC, this ammunition is green compliant and safe for use in California. 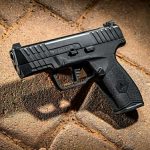 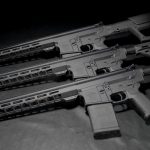