Ridgeline Defense, out of New Hampshire, has released their latest rifle sling, the HOGleash. This two-point adaptive sling has three key features designed with the precision rifleman in mind and is in collaboration with Edgar Sherman Designs with help from Cole-Tac.

With over a decade of trial and error, and apparently buying beer for riggers to stitch up mods to an OG VTAC sling, this sling has an integrated snap-shackle and a custom-made, carbon fiber inline rifle support. Additionally, everything was designed and produced in the state of New Hampshire, making it Berry Compliant. (For those that might not know, that means that the pieces and parts are all made in the US of US-made components.)

“When I was going through the USMC SOTG Urban Sniper Course, we were using our old issued cuff slings for the M40s,” says Ridgeline Defense’s Alex Hartmann. “We would attach the cuff to our belt, but it wouldn’t adjust very well. So, one weekend, I worked with a rigger to modify an OG Viking tactics V-Tac sling to work better. When I went back to class the next week, I was performing better.”

Over the course of multiple deployments, Hartmann kept tweaking the design until it was exactly what he wanted and needed. Part of the drive to make it was to use it while instructing at Ridgeline Shooting and illustrating to his students what he used and why it is important.

The quick-release snap shackle, which is similar to a Helo retention lanyard, allows the shooter to clip in or out of the sling quickly and with one-handed operation. When attached to the beltline, the shackle is used to apply tension to a supported rifle. To apply tension and stabilize your rifle either on a tripod or other support, attach the sling to the front of the rifle and attach it to any available belt loop on your beltline.

Ridgeline says that it is faster and easier for quick setup and breakdown when compared to a carabiner. In a shooting position that doesn’t need it, the snap shackle is captured by an accessory loop and stays out of the way.

The back of the sling is made of carbon fiber-composite material meaning it weighs very little and stays against the user until it is needed. The front of the sling is purposely left barren of hardware.

Once installed and adjusted correctly, it adapts to any shooting position and cinches down to secure the rifle in cases of fast-roping, climbing, rappelling, or other dynamic movements. The 1-inch nylon webbing features high-quality ITW Nexus findings and is compatible with any sling attachment hardware.

The Ridgeline HOGleash is available in black, green, coyote, and Multicam. It comes with a lifetime warranty and a price tag of $120. 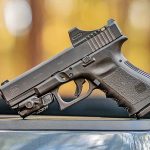 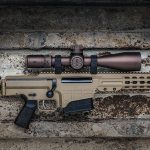