Vortex Optics, an industry giant in the optics field for the last few decades, has announced the latest addition to their large family, the Razor HD Gen III 6-36×56 FFP riflescope. Building on nearly 30 years of experience in the field, they wanted to create a balance between providing the tools and features that a shooter needs for long-range accuracy with the clutter-free, intuitive controls they need for decisive actions.

The new Vortex Razor HD Gen III 6-36×56 FFP riflescope offers all the magnification you need to go long-range while staying “…crisp and incredibly clear” throughout the magnification range. The optical system is designed with the balance of magnification and field of view in order to provide the resolution and contrast you need to clearly identify targets.

Weighing in under 4 pounds, this new optic, they say, “packs a punch and then some”. The overall length is 15.3 in. and has an anodized stealth shadow finish. The Razor HD Gen III is an HD optical system that is also waterproof, fog proof, and shockproof.

The L-Tec Zero Stop System with micro-adjust dial means, as they describe it, “…a rapid return to an ultra-fast, fine-tuned zero. Round it out with a rugged build designed for the field and you have the long-range tactical solution you’ve been waiting for.”

So, what’s different between Gen II and Gen III, you ask? Well, both optics are of excellent optical quality in the package that you get with exposed locking elevation and windage turrets along with the locking illumination dial and parallax adjustment knobs. But with Gen III, you get the higher magnification and an improved optical system and features.

The new features that the Razor HD Gen III has over the Gen II are the edge-to-edge view field and better low light performance. Additionally, the L-Tec Zero Stop feature is more advanced and easier to use – only one set screw on the Gen III. The parallax adjustment goes down to 10 yards whereas the Gen II only goes down to 32 yards. While Gen III is the next generation of the Razor optic and is bigger than the Gen II, it comes in 3.5 ounces lighter than the Gen II.

Included in the box from the factory are a 3” sunshade, battery, custom throw lever, and turret tool, just to name a few things. MSRP for the MOA and the MRAD version is $3,999.99. 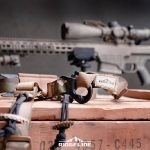