It’s 1975, and you’re the Swiss Military. Your sidearm is the fantastic Sig P210, but boy, oh boy, is it starting to show its age. The P210 utilizes a single action only system, sports a long 5-inch barrel, and has been kicking around since 1949. You need a new service pistol, and your favorite Swiss Arms maker has you covered with their new Pistole 75, aka the Sig Sauer P220.

When the Swiss needed a new service handgun Sig had a new option for them, the P220.

Almost half an inch of barrel has been shaved off to make the pistol a bit more compact than the P210, and the P220 is four ounces lighter than the old warhorse. The Sig P210 utilized a Petter Browning system, but the P220 would be the first gun to use the new Sig Sauer system. This closed the need to license the Petter system and resulted in a more modern and robust pistol design. Like the P210, the P220 utilized a 9mm cartridge and a single stack magazine.

America loves our 45 ACP and even the Swiss-Germans acknowledged it.

Even though the P220 is more compact than the P210, it’s still a massive gun. It tips the scales at 30 ounces, is 7.7 inches long, 5.5 inches tall, and 1.5 inches wide. Trust me, it fills your hand well, and even my big hands are challenged by it. If I ran out of ammo, I could beat you to death with it.

The Sig Sauer system locks the barrel and slide together using an enlarged breech section on the barrel, locking into the ejection port. Most Sig pistols utilize this system, as do many other modern pistols. The Sig Sauer system creates an easier to manufacture pistol that’s more reliable and accurate than previous designs.

The Decocker makes it easy to decock the gun to double action mode.

Besides being the first pistol to use the Sig Sauer system, the P220 was the first Sig Sauer pistol. Prior to the P220, you had Sig and J.P. Sauer and Sons. Both made excellent firearms, but the Swiss are notoriously fickle among exporting firearms. J.P. Sauer, a German company, was capable of producing and exporting pistols to the international market.

Since then, Sig Sauer has become one of the biggest names in not only handguns but rifles, optics, suppressors, and squad support weapons.

J.P. Sauer and Sons were German, and if you know anything about history, you know that in 1975 the Berlin wall separated Germany into West and East. David Hasselhoff had yet to take that commie wall down. This leads to the famous West German markings on Sig Sauer Pistols.

My P220 wears the famed marking. Are the West German P220s better than the standard models? There is some debate among Sig fanboys. I can’t speak from experience, but someone once told me, “A modern Sig is likely a pretty good gun, but I know a West German Sig is a good gun.” 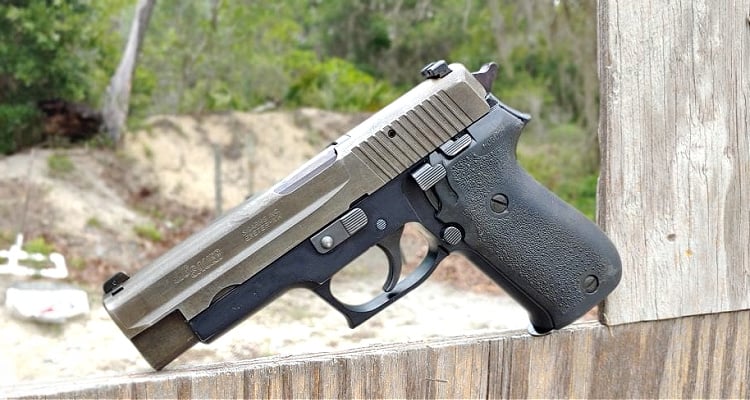 The Pistole 75 variant of the P220 came in 9mm, which was the caliber Europe chose for their warfighting pistols. When Sauer imported the guns into the United States, they offered 9mm variants, followed by 45 ACP variants. This was the late 70s and early 80s. We loved our freakin’ 45 ACP.

The slide release started a tradition with Sig pistols. Mainly making it almost impossible not to pin down.

Sauer worked with Browning to import these pistols, and they were labeled the Browning BDA. No to be confused with the other Browning BDA pistol. These early pistols utilize the very European heel magazine release. After 1980 we saw imports wearing the standard push-button magazine release.

Our sample here came after the Browning days and wore the SIGARMS stamp for import. This is also a 45 ACP model, which is seemingly the easiest to find. After the P225 and P226, Sig P220s in 9mm weren’t a big seller and 45 ACP remained as an alternative to the 1911. 45 ACP guys seem to love guns with low capacities and heavyweights.

The P220 does have a very striking appearance. Mine has been to hell and back more than once.

Lord knows how many hands this P220 passed through before it came my way. The old stamped steel slide has lost most of its original finish. It looks rough, and the old night sights are dead. However, the old dog still has some bite in it.

The Sig P220 is what brought Sig and Sauer together.

The P220 provided the Swiss a modern fighting implement.

Staging the trigger during your double-action pull is possible. You can hold the hammer almost entirely cocked and ensure you have a good sight picture before finishing the trigger pull. The single-action offers a little take-up and what barely qualifies as a wall before breaking and firing. A short reset ensures the trigger is ready to rock and roll again quite quickly.

Like the trigger, the slide is well worn. It’s broken in and allows for a smooth pull that feels like the slide is on ball bearings. It glides rearward with ease. The decocker and magazine release are well-honed and both easy to use.

Surprisingly, the gun offers a high level of reliability. It looks beat up but still eats, shoots, and ejects consistently with a wide variety of ammunition types. Even modern 180-grain JHPs have no issues feeding through this old fighting pistol. Heck, even crappy steel-cased stuff doesn’t provide any issues with the gun.

The Sig P220 magazine gives you a single stack with limited capacity. 8 to 10 rounds are all you get.

I love shooting this gun. It delivers an excellent experience with every trigger pull. The outstanding trigger pull in single action makes it easy to deliver accurate fire at various ranges. I tickled myself, hitting a small 4-inch gong at 20 yards trying to clear the deck. Hearing those big 45 ACP rounds hitting steel warms my heart.

Much like the Government size 1911, the P220 wears the badge of being obsolescent. It weighs a ton and doesn’t offer the capacity to justify the weight or size of the gun.

The Sig P220 with its great-grandson the SIG AXG.

Sadly warhorses like this are getting harder and harder to find, at least with the West German stamp. It’s an interesting piece of history from a curious time. Not only is it a product of its time as a handgun, but it’s marked appropriately as such. The world has since moved beyond a split Germany, beyond widespread communism, and beyond single stack boat anchors.

Although of those three, the only one worth visiting is the single-stack boat anchors. The P220 helped make Sig Sauer the company it is today. The descendants of the P220 make up a beloved line of pistols with a long history of service. The P220 brought together a Swiss and German company that now makes America’s newest service pistol and America’s favorite concealed carry pistol. The P220 is the butterfly effect that’s pushed Sig Sauer to the mainstream.