It’s a helluva week for Springfield to reveal a new magazine for the oh so famous Hellcat. Sig Sauer has announced a patent lawsuit against Springfield Armory for infringement on the Sig P365 magazine. Yet, Springfield perseveres and has released their latest magazine for the Hellcat. The Hellcat, much like the P365, is one of the few micro-compacts on the market—micro-compact seemingly being what we are calling super small 9mms with a high degree of capacity. The latest Hellcat magazine holds 15 rounds of ammunition.

The Hellcat premiered with 11 and 13 round magazines for the pistol. The 11 rounder fit flush into the Hellcat, and the 13 round variant offered you a slightly extended option. For the longest time, Sig held a slight advantage with the P365 and the availability of a 15 round magazine. Now Springfield has closed the gap between the Hellcat and the P365. Springfield’s new Hellcat magazine gives users 15 rounds of 9mm on tap.

11, 13, and 15 round magazines allow the Hellcat to be customizable for easy concealed carry and gunfighting.

Breaking Down the Hellcat Magazine

The key to the success behind the Hellcat and Sig’s magazine design is the way it tapers. Near the top, it’s a single stack design for the first three rounds. Below that it tapers into a double stack design. The magazine has a chrome exterior coating and witness holes from rounds 4 to 15.

A witness hole for every round makes eyeing capacity easy.

Like most extended magazines, the 15 round Hellcat magazine will make you choose between capacity and concealment, well, kind of. What’s the point of a super compact handgun if the handle has the same length as a Glock 19? I see Hellcat’s 15 round magazine being carried as a spare magazine.

Carrying the Hellcat with an 11 or even 13 round magazine keeps the weapon concealable, and packing an extra 15 rounds for when things go south makes a lot of sense. It’s easy to drop a magazine in a pocket and forget all about it.

I’m not making a full-on comparison of these two guns— it’s been done before. However, I want to talk about the two guns and their magazines. Specifically, I want to compare their 15 round magazines. Fifteen rounds of ammo is a ton for a subcompact, almost pocket pistol-sized gun. So who does it more efficiently?

Both the Hellcat and P365 now offer 15 round magazines.

I grabbed my standard P365 frame, a 15 round magazine, and compared it to my Hellcat and its 15 round magazine. The SIG magazines use side witness holes every five rounds, which isn’t a big deal, but I prefer the Hellcat style.

The SIG’s all-black magazines have this nasty habit of rusting. I don’t use the 15 round magazine often, but I wasn’t shocked when a good bit of rust developed on the rear of it. I store my handgun magazines together, and the P365 magazines are the only ones that consistently rust. I’ve never had any issues with rust with the Hellcat magazines.

The P365 15 round magazine is noticeably longer than the Hellcats.

Size-wise the Hellcat magazine provides a more efficient and slightly shorter magazine. When you measure from the top of the rear sights to the bottom of the magazine, the Sig P365 measures 5 ⅛ inches. The Hellcat measures 5 inches even.

The Hellcat’s main competitor happens to be the Sig P365, which already has a 15 round magazine.

The Sig P365 magazines provide two points of grip to rip the magazine from the magwell if needed. The Hellcat doesn’t pack the same grip points.

So does the magazine work? My previous experience with the Hellcat left me feeling confident enough that it’d work, but I needed to figure it out for myself. Loading the magazine is a feat of strength. The Sig has extra room to stretch and makes it rather easy to load.

Getting the last three rounds into the 15 round Hellcat magazine is a serious feat. I had to give my thumb a rest before I could load the final round. Holy crap, this thing is hard to load. When loaded, trying to get the magazine into the gun with the slide closed is another feat.

Not gonna lie, my big hands dig the extended grip.

As much as I’d love to do a plus 1 with this magazine, I’d probably just drop the +1 into the pipe directly. Once the magazine was loaded up, I wasn’t excited to load it again. The good news is that I got to unload it the fun way.

I emptied the magazine and committed a reload with a spare 13 rounder. I let the magazine hit the dirt, and this was the first reload of many I committed to. My range area is finely tuned sand, and sandhills are not uncommon in Florida. It’s fine white sand, and it’s coarse and rough and irritating, and it gets everywhere.

Sand sucks for firearms, but the magazine didn’t choke even after taking a few dives into this crap.

Size matters, but sometimes you want to be shorter than longer boys.

I completely loaded it two more times after it was exposed to sand, and it still functioned without issue. It also fed a good deal of sand into my gun, but no big problems to report.

15 rounds of 9mm provide you plenty of options to deal with nearly any threat. It’s a lot of ammunition and provides plenty of firepower for any concealed carrier. The Hellcat magazine design is rather efficient and quite reliable. I broke the gun and magazine down, and a little warm water and a rag cleaned it out, and we were back to being golden. It’s always nice to have more options than fewer. Does the 15 round Hellcat magazine appeal to you?

Would you carry in the weapon or as a spare?

Let us know below. 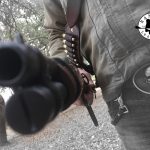 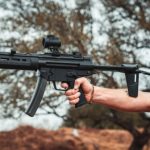