Stoeger Industries has expanded its popular STR line of striker-fired, polymer-framed pistols to include a .40 S&W model with four variations. The STR-40 has a standard variation as well as optics-ready models.

The Stoeger STR series of personal defense weapons have earned a following thanks to its high level of reliability, high feature content, and excellent performance-to-price ratio, according to the company. This is the first caliber expansion since the line was started.

The first model option is the standard STR-40. It has an integrated rail on the nitride-hardened matte black receiver. The STR-40 also has a 4.17-inch barrel with a loaded chamber indicator and internal safety. The slide has aggressive front and rear slide serrations for easier handling.

The mid-size frame gives the shooter exceptional muzzle control and comfort, according to the company, while the rail provides ample space for lights or lasers. On the slide is a quick-acquisition three-dot sight set-up that gives a clear sight picture for faster follow-up shots. The difference between the two Standard STR-40 models is one comes with a 12+1 magazine while the other comes with a 10+1 magazine.

The STR-40 is also available in an optic-compatible slide that boasts tritium night sights with the same capacities as the standard model. The tritium night sights make for an ideal addition to a home defense scenario or everyday carry applications. The optic cut on the slide comes with a cover plate with four adapters that are compatible with some of the most popular red dots on the market.

The STR-40 weighs in at 28 ounces for either model or variation. Both models, and its variant, come from the factory with a set of three interchangeable backstraps for optimum fit to the shooter’s grip. The Stoeger Industries Standard STR-40 pistol has a price tag of $329 for either variation, while the optics-ready STR-40 has a price tag of $449. 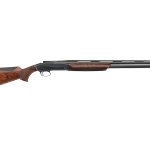