The MP 12 bullpup shotgun is a 12 gauge pump-action designed, S&W says, for home protection. Released just this morning, the M&P 12 is not the first Smith & Wesson shotgun, but it is the first in many years (and their first commercial bullpup design ever).

Like its handgun and rifle predecessors, M&P stands for “Military & Police”.

A reciprocating cover with a release button provides the mechanism for clearing damaged shells, and an assist button on each of the magazine tubes is provided to assist in loading and unloading.

• Assist buttons on each magazine tube to make loading/unloading easier.

• Picatinny-style rail on top for sights/optics.

• Ambidextrous QD push button base on the buttstock.

Some previous S&W “scattergats” include:

· The AS Assault Shotgun, a magazine-fed select-fire shotgun reminiscent of the M16

· The SW Model 916, a rebranded shotgun design originally produced by the Noble shotgun factory as the Noble Model 66. The Model 916 was available in a couple of different versions, including tactical and takedown, but unfortunately like the Model 66 before it consistently suffered reliability issues. In fact, the 916 was later voted one of the worst modern shotguns of all time, though S&W evened the scales back out with the Model 3000 (a design that itself spurred an improvement on the 870 by Remington). 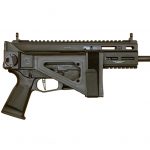 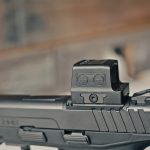