Big Horn Armory’s tagline is “half-inch holes,” and I think that’s absolutely fantastic. If you’re going to have a company built on building large-caliber rifle and pistol options, then you can’t have a better tagline. Big Horn Armory makes gleeful use of the 500 S&W cartridges in a variety of weapons, including lever guns and ARs. Well, sort of. You see, I got my hands on the Big Horn Armory AR 500 and a little 500 Auto Max ammo.

The 500 Auto Max hits hard and can take any dangerous animal on the planet. It’s a powerhouse of a round that can pack a punch with projectiles ranging in weight from 350 to 600 grains from the factory and well beyond by hand loaders. Big Horn Armory invented the AR 500 and 500 Auto Max, but it’s loaded by Steinel, Buffalo Bore, and Underwood in various power levels.

The 500 Auto Max hits hard, but as you’d imagine, it’s a limited range caliber. Within 100 yards, a 350 grain round hits with over 2,000-foot-pounds of energy. At 200 yards, it drops to 1,600 foot-pounds, and the round drops about a foot ballistically. Within that speed spot from 0 to 150 yards, it will break bone, tear through muscle, and efficiently kill big animals.

The 500 Auto Max cartridges fit into a proprietary magazine, and the AR 500 pistol ships with two five-round magazines. I also picked up a nine-rounder. The nine-round magazine is about the same length as a 20 round 5.56 magazine for perspective.

This AR 500 is an AR pistol that uses an upper and lower largely based on the AR 10 platform. That being said, it’s entirely its own thing. Everything about this bad boy is dummy thicc. The takedown pins, the mag well, the upper and lower, everything is beefy and capable.

The bolt carrier group is massive! It’s a big beefy thing that dwarves a standard 5.56 BCG or even a .308 BCG. Honestly, everything about the gun is huge except the charging handle. It’s a dinky Mil-spec-style charging handle. You have barely any leverage to work the massive bolt against a rather heavy buffer.

Beyond that, the billeted upper and lower look fantastic. The magazine well has a nice funnel to it. The gun comes with an ambidextrous safety and ambidextrous bolt lock. However, the magazine release is standard righties only.

The 10-inch barrel comes fitted with a big ole muzzle brake. Behind it sits a hefty M-LOK forearm with some rail tacked on for some basic accessorizing. Across the top, we got a huge optic rail perfectly suited for a red dot. At the opposite end, we have a blade-style brace. It’s adjustable via two bolts that use friction to keep the brace locked in place.

While it’s short, it ain’t light. The AR 500 weighs 8.1 pounds empty without an optic. It’s a hefty beast, but what do you expect from what’s basically a 500 S&W Magnum AR?

It’s rare I approach the range not knowing what to expect. I had some nerves fluttering around. I’d handled big-bore ARs like the 458 SOCOM, 450 Bushmaster, and similar guns. However, this was entirely new. I loaded up the two five-round magazines and a nine-rounder with a little 500 Auto Max and hit the range.

I knew to expect recoil, and I knew the brace wouldn’t be recoil friendly. Boy, was I right. There is some substantial recoil to this gun. It hits hard, and the brace certainly isn’t comfy. The brace makes it worse than it needs to be. It’s roughly the same recoil as a 3-inch 12 gauge magnum round. The brace beat me up and has since left me bruised and literally bloody.

But holy crap, was it fun! I like recoil and a challenge, and the Big Horn Armory AR 500 provides that. It’s everything my red-blooded American body loves! It’s loud, has a hint of muzzle flash, kicks hard, with some serious muzzle rise. Every shot gives you a thrill, and I had a blast, both literally and figuratively, with the AR 500 pistol.

Zeroing is usually boring, but it was thrilling with this gun. Since ammo is expensive, I did a very careful and methodical zero with tapes measures to get my 510C on target. After a 50 yard zero, I moved to 100 yards and tested for accuracy.

My group was about 1.5 inches. The gun doesn’t achieve MOA accuracy, but it’s dang near one big hole. I guess that’s what happens with half-inch holes. I achieved the group in a supported bench rest position with a simple red dot. Big Horn Armory seems to know their triggers, and the trigger was very smooth and fairly light. It takes a dedicated pull, but there is no take-up, and it’s super short with a very positive reset.

I will say the brake shoots lots of fire and gas downwards and that creates a rather dusty environment. Interestingly enough, if you focus, you can feel the massive bolt slamming rearwards and then running forwards. As a machine gunner, it reminded me of an open bolt gun firing the first shot. Part of your recoil impulse is the bolt slamming back forward, and with the big AR 500 bolt, you certainly feel it.

When you conduct a reload and hit the bolt release, you can most certainly feel that massive beast shoot forward and lock into place. Speaking of reloading, the magazine has to be inserted straight upwards and seems to have very little wiggle room. I had to pull the magazine forward a little bit partway up the magwell to get a smooth reload.

Also, the nine-round magazine would not insert fully loaded on a closed bolt without a seriously hard slap. Hard enough, I was a little scared of deforming the ammunition. I did love the ambidextrous bolt relief. I just needed to move my trigger finger up and hit the go button.

The ammo costs about two bucks per round, so I didn’t have hundreds and hundreds of rounds to test. I had 100 rounds, and I blew through it without issue. The gun never failed in that hundred rounds. It’s not much, but spending a grand on ammo isn’t in the budget!

While the recoil might be stiff, you can still achieve those sweet double taps. Well, double tapp-ish. It’s more like a controlled pair after you take the recoil and muzzle rise into account. If I was hunting a big animal, I’d feel comfortable in being able to get a follow-up round on target quite quickly if I needed to.

Put me within a hundred yards of a pack of hogs, and I will obliterate at least two of those bastards. The big, hard-hitting round leaves some room for a suboptimal shot. That shouldn’t be a goal, but a big, heavy, hard-hitting round rips and tears.

The AR 500 lays down some serious thrills. It’s powerful, hard-hitting, and a ton of fun to shoot. It’s certainly accurate enough to hunt and dominate inside of 150 yards or so. It’s a big beefy gun with a real niche use. Sure, the recoil hits hard, and the blade-like brace is most certainly a blade, but you can’t expect less. My only real complaint is the tiny charging handle. Everything about this gun is beefy, so why would you leave out a big beefy charging handle?

Luckily, it’s an easy fix. The AR 500 pistol gives hunters a very capable close-range weapon designed to hit hard and kill any big, dangerous animal that crosses your path. Big Horn Armory clearly knows how to make a damn fine rifle. It’s capable and very well made. Now I need to save my pennies for some more ammo! 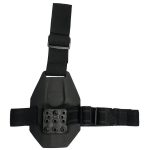