Who doesn’t love a good heist movie? The good ones have us rooting for the supposed bad guys, who are usually portrayed as enriching themselves by sticking it to “the Man.” “The Man” can be the government, a faceless corporation, a hoity toity bank, or just some rich snot who totally deserves it. One of my favorite heist films (Kelly’s Heroes) is also a good war movie. The best heist movies also carry a revenge factor, like The Italian Job. 1967’s The War Wagon is one of those.

The Duke as Borderline Bad Guy

I’m a sucker for a good John Wayne Western, and The War Wagon is no exception. The Duke plays Taw Jackson, a rancher wrongly imprisoned for an unspecified crime. Turns out he was framed by mining magnate Frank Pierce (Bruce Cabot), who wanted the gold recently found on Jackson’s ranch. How Pierce gained control of the ranch is unclear, but it doesn’t affect the story. It’s enough to know Pierce is a greedy snake with no morals.

The War Wagon was the first movie in which Wayne was a bad guy, even if it was forced on him by Pierce. The revenge-driven Duke, out on parole, is convincing as he plans to steal back his gold and kill Pierce in the process.

The War Wagon is 55 years old, so spoilers aren’t really a thing, but I won’t ruin it for you either way. Pierce periodically transports gold dust from his New Mexico mine to El Paso in an armored stagecoach he calls his “War Wagon.” A safe inside the coach holds the gold and Pierce rides inside with several rifle-armed guards. Fourteen more mounted riflemen ride ahead of the War Wagon with fourteen more behind. Early in the movie, Jackson says the guards are all armed with Henry rifles, but they actually carry Winchester Model 1892 carbines. Of course, your average Western fan won’t know the difference.

Jackson plans to ambush the War Wagon and take an upcoming shipment worth half a million dollars. If he can kill Pierce too, well, so much the better. His intelligence comes from Wes Fletcher, a wagon driver working for Pierce. Fletcher is played by Keenan Wynn, who also plays Colonel Bat Guano in one of my favorite films, Dr. Strangelove. Fletcher is a crusty old coot and proves himself to be not exactly trustworthy, but Jackson needs him for the heist.

The story is supposedly based on a real armored wagon called the Monitor that ran gold out of Deadwood South Dakota. At least one outlaw tried to rob it. It ended badly for him.

Jackson recruits three other men for his crew, each with a very particular skill set. This was before Liam Neeson’s time, so he ain’t one of them.

The second recruit is the gunslinger/safecracker Lomax (Kirk Douglas). Lomax is second place only to Jackson as the film’s main character. Jackson and Lomax have a complicated relationship, considering the latter shot the former as part of Pierce’s earlier shenanigans. We never hear the particulars, but it’s not necessary to the story.

Neither man trusts the other, but Jackson needs a shooter and a safecracker and Lomax wants the equal share of gold Jackson promises him. Pierce complicates things by offering Lomax 12 grand to kill Jackson. Seems having the man whose ranch and gold he stole hanging around makes him nervous. Lomax accepts the offer and keeps it hanging over Jackson’s head to make sure he gets his share.

The next gang member is Levi Walking Bear (Howard Keel), a Kiowa who is instrumental in gaining his tribe’s aid in Jackson’s scheme. Seems they don’t like Pierce either.

The gang’s final member is teenaged alcoholic and explosives expert Billy Hyatt (Robert Walker, Jr.). We’re never told why an 1870s teenager knows so much about explosives. Suffice it to say that he is competent with dynamite and nitroglycerin, which helps when you’re trying to spring gold from an armored stagecoach.

I won’t spoil the plan and execution because it’s well-presented and fun to watch.

Guns of The War Wagon

Robbing the War Wagon obviously won’t be easy, and you know guns will be involved. But the menu is concise and there are only three firearms with prominent roles.

The ubiquitous Peacemaker is the iconic Western firearm. It’s what all the fashionable outlaws and lawmen carried, at least as far as Hollywood is concerned. Jackson and Lomax put them to good use early and often, and Frank Pierce carries one as well.

Here are the 1873 SAA Revolver’s deets, if you don’t already know them:

Despite Jackson’s assertion that all Pierce’s men carry Henry rifles, they’re really, as noted, Winchester 1892 carbines. Like the Colt SAA Revolver, the Model 1892 was a Hollywood favorite. The Duke used them in lots of his movies. The 1892’s use is also anachronistic since the movie is set in the 1870s, more than a decade before John Browning designed the Model 1892. But, you know, Hollywood.

The 1892 also featured prominently in the popular 1950s and 60s TV Western The Rifleman. Great program. Right up there with Gunsmoke in my book. Interestingly, it was John Wayne and Chuck Connors, as the Rifleman, who popularized the 1892’s large loop lever. It never existed before then. The large loop made easier handling for the Duke’s big mitts and for Connors’ slick cocking spin.

Fletcher gives Jackson a nasty surprise with news that he recently delivered 10,000 rounds of ammo to Pierce’s ranch. Jackson correctly deduces that Pierce is installing a Gatling Gun for the War Wagon’s big half-million dollar run.

He isn’t wrong and the armored behemoth rolls out on the big day sporting a new 360-degree turret, complete with the big gun. On a side note, the turret doesn’t appear tall enough to accommodate the Gatling Gun’s top-mounted gravity-powered feeding device. Ah well. The story works either way and makes the ambush more daring.

The War Wagon: A Fun Movie

The War Wagon is among my favorite John Wayne films. The plot is good, being based on Clair Huffaker’s 1957 novel Badman. Huffaker himself wrote the movie’s screenplay. I expect the book provides more background on Taw Jackson and the other characters, but that’s the usual with movies and books.

The movie was filmed in Durango, Mexico and at Churubusco Studios in Mexico City, giving the landscape an authentic Southwest feel. Studio back lots are fine for some movies, but The War Wagon’s outdoor plot is much better served by filming on location.

Kirk Douglas is another bright spot. Seeing him and John Wayne together is a real treat. He has some great lines, and his stunt double is very creative when mounting a horse. Even though Douglas was in his 50s at the time, he pulls off the gunslinger role quite well.

The several fistfight scenes are corny by today’s standards, but hey, it was 1967. That’s how they did things. All in all, it’s a fun movie with plenty of action and a neat twist at the end. If you like Westerns, heist films, or both, check out The War Wagon. Bet you’ll like it. 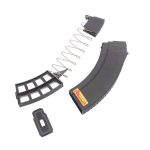 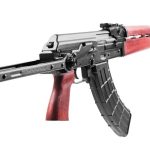