The Walther PPQ was the first handgun I found that stood a chance at unseating the Glock 19 that I’d carried for years. This was a 9mm PPQ M2, not the PPQ 45 here in this review, but the ergonomics of these guns and their performance are both very similar. The gun fits my hand, points exceptionally well, and provides the solid reliability that we should all demand of our EDC guns.

There is a catalog model (The PPQ 45 SD) that comes with the threaded barrel, if you’re lucky enough to find one in stock.

The highlight of the PPQ line is a toss-up. The trigger is truly one of the best factory triggers available. The shoe moves less than half an inch. The reset is even shorter—just one-tenth of an inch. And there’s not a hint of grit or sponge in it. If trigger performance is important to you, this line has to be on your radar.

The remainder of the controls, though, stand out, too. And these are built into an ergonomic design that has come to define the Walthers of late. These guns have a complex geometry that matches that of the hand.

Check the image above. There are curves within the curves. The PPQ 45 has to accommodate a double-stack magazine, but the grip is still easier to hold than that of a 1911.

The rear of the frame is undercut for a high grip. This is one of the reasons why the gun points so well for so many. The trigger guard is undercut, too.

The grip is covered in small half-moon-shaped protrusions at alternating intervals. As grips go, this is not as tactile as some of the rough sandpaper-like textures that are growing in popularity, but still sticky enough that your hand stays where you put it.

The slide, too, has a variety of textures for easy manipulation. The cuts are deep and wide, and they’re not sharp-edged, but the depth alone is enough to provide for a solid grip. And the PPQ 45 has cuts on the front and the rear.

The controls are worth talking about, too. The most noticeable will be the slide-drop lever. This is a long bar that protrudes from both sides of the pistol. While most guns offer a little nubbin of steel to thumb down the slide, this one extends far down the frame and requires very little pressure to actuate—that’s physics for you.

There aren’t any external safeties, other than the lever in the trigger shoe. Inside, there’s a firing pin safety and a disconnector safety. The combination gives the PPQ M2 its drop-safe clearance.

Sights on the standard version are a simple three-dot pattern. They’re low and unobtrusive. There’s a version that comes with XS night sights, and those seem like they may be taller.

In the stock configuration, the sights don’t clear a suppressor. This isn’t always bad, though you will need to know what your target looks like with the obstruction of the can itself superimposed between the front sight and the target. In other words, you have to make some allowances when using these sights with a can, but accuracy is still very reliable.

But it could change my mind. The 12 round magazine and compact design make this a compelling choice for EDC, especially in winter when I could wear it OWB and still keep it completely covered. And everything about this gun is designed for regular use and carry.

I’ve already talked about the insane reset. One-tenth of an inch. This makes follow-up shots crazy easy. When combined with the PPQ M2’s ergonomics, which go a long way in mitigating the recoil and muzzle-rise of the compact .45 ACP, this becomes a seriously fast gun that is easy to keep on target.

In fact, if you are shooting one for the first time, the trigger will likely be the takeaway. It will take a bit of practice to get used to. The image below shows what I mean.

I was working on connecting up a group of shots and didn’t yet have my sights perfectly realigned when I pulled off that flyer. I’m accustomed to triggers that are a bit more forgiving, so I’d already begun to pull back in anticipation of the shot I was about to take when I felt the shot fire.

With a 12+1 capacity, the PPQ 45 M2 has a solid capacity for a .45. The mags are built of steel and are stamped with several geometric impressions that both provide strength and guide the double-stack of rounds into a single column.

The design works and doesn’t need to be babied. The most care one of these mags needs is a good cleaning and light oiling. As the bluing wears, watch for rust. Even then, though, buff it off and oil again and keep going.

The body of the mag is labeled with a caliber. This, though, is small. While the size is indicative of its caliber, the mag can get easily confused with others that look similar.

This is one of the problems with guns like this, I think. The mags are solid, durable—everything you’d want, really. They’re also not super easy to find. These are running about $40 a piece.

Adding a silencer can change your point of impact a bit. The shift isn’t much, but you may need to compensate for surgical shot placement.

A red dot can help with this, as the optic can be sighted in on the true point of impact. Some sights can be adjusted, too, which is a longer-term solution. So long as the silencer tightens down on the barrel in the same position (with the baffles in the same position, really), then the impact shift should be consistent with any given type of ammo.

The Walther PPQ 45 M2 tends to follow a swimming motion during recoil. This is the part of writing that is complicated; I know exactly what I mean, but it is hard to communicate. The gun moves up (less than with unsuppressed fire), but there’s more mass, too, which slows that motion.

Then getting back on target requires that the downward momentum of that extra mass be slowed down so you don’t over correct and dip the muzzle down. This isn’t easy, so there is often a up, down, back up slightly motion that feels like the motion of a wave.

The Banish 45 is all titanium, so it isn’t heavy. And the baffles cut the sound of the .45 ACP to hearing safe levels. It is a joy to shoot, really, and the sound of those fat rounds thwacking on the steel is much louder than the muzzle blast itself.

Holstering, though, is problematic. While there are plenty of holsters for the PPQ 45 M2, adding the threaded barrel makes it slightly harder to holster, and the suppressor is really more of a dedicated addition to the gun.For a home-defense gun, though, it is a solid addition. For range work or plinking, this is addictive. The PPQ 45 cycles everything, even when suppressed, and offers more on tap than your bog-standard single-action.

Price? Looks like the selling price would be somewhere on the positive side of $700, but that would be determined greatly by availability (they’re hard to find in the wild). 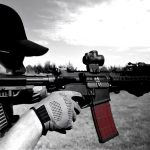