FN’s dedication to precision and high-quality products is well known. It’s no surprise they took the same approach when it came time to develop the FN Rush 9Ti suppressor, the first suppressor from FN. According to the company, the suppressor was perfected to maintain the exceptional accuracy, cycling reliability, and high durability FN 509 owners expect.

The FN Rush 9Ti suppressor was developed to give the shooter an unmatched shooting experience with FN 509 pistols along with other 1/2 x 28 threaded firearms. The suppressor is a constructed lightweight Titanium-hybrid giving the ultimate strength-to-weight ratio in the trim titanium tube. The 7.3” long and 1.375” diameter tube is perfectly suited to clear suppressor-height sights and only weighs 10.8 ounces. The combination of the booster and the light weight means that the additional weight of the suppressor won’t affect the function of the host pistol.

“The FN Rush 9Ti is the first introduction in FN’s portfolio of firearm accessories that enhance the end user’s shooting experience,” said Chris Cole, Vice President of Sales and Marketing for FN America, LLC. “Our goal with developing the Rush 9Ti was to give consumers a reliable and durable 9mm suppressor that met FN’s rigorous quality standards and would integrate seamlessly with the FN 509 and other 9mm hosts. We tackled some of most common complaints about suppressor performance like blowback and recoil reduction to deliver a final product capable of mitigating both.”

Inside the suppressor is a progressively ported aluminum baffle stack along with the blast chamber. The blast chamber is made up of two blast baffles, and the baffle stack diffuses the gas to stabilize the pressure and reduce the blowback. The booster, with its advanced booster assembly, makes attaching smooth and repeatable while the tight piston gas seal contains any carbon fouling in the baffle core to reduce the blowback, recoil, and stoppages that can happen with other suppressors.

The FN Rush 9Ti suppressor is said to work flawlessly with almost every ammunition type, from 115-grain up to 165-grain subsonic loads, and is made to withstand high cycle counts complete with a limited lifetime warranty. The suppressor is available in either Flat Dark Earth or Black HT Cerakote. In the box from FN are the 1/2-x28 piston, booster assembly, end cap, front cap assembly tool, and storage case. The FN Rush 9Ti suppressor has an MSRP of $849. 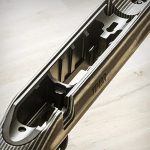 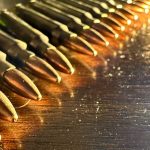