Winchester ammo has been around for a while. The company has been in business for more than 150 years since its founding by Oliver Winchester. They became a legendary name when they designed and produced the lever action 1873 rifle. They would become a household name when it came to lever action rifles and shotguns. They are also well known today as an ammunition manufacturer.

The combination of ammunition can almost be endless. Brand, grain, bullet design and more can all make selections difficult depending on what you need in a bullet. You may not want to target practice with a premium high-end bullet. But you also may not want to hunt and take that 500-yard shot with a low-grade target round. Different types of ammunition have different purposes. So, what can you use target ammo for? Let’s look at what it can do and what its limitations are.

What can I use Winchesters M193 target ammo for?

There are a few different purposes for ammunition types. Some of the biggest categories are self-defense, hunting, competition shooting, recreational shooting, and combat shooting. During my first tactical firearms instructor school, they talked a great deal about the difference between precision accuracy and combat accuracy. Combat accuracy is shooting center mass at faster speeds, not hitting the bullseye. Precision accuracy is hitting the intended mark or bullseye and keeping a small group.

Why is there a difference? Both types of ammo and both types of shooting have a purpose. If your intent for a round is self-defense, you won’t need a high-precision bullet made to travel 700 yards and hit within a two-inch group. You will need it to be reliable and combat-accurate. If you are hunting, you need higher precision. Winchester’s 5.56 target ammo is not what I would use for long-range precision shooting, but it works great for range practice, and I like to use it in the AR pistols that I stay within 200 yards with.

If you are new to ammo, some of the most important things to look at are the bullet grain and muzzle velocity. The M193 is a 55-grain (grain is the weight of the bullet) and has a muzzle velocity of 3180 fps (feet per second). Unfortunately, there is not one good bullet for all guns. The length of the barrel, barrel twist, temperature, humidity, and more will all have a different effect on each different type of bullet. In general, 55 and 64 grain are the most common for 5.56mm bullets. Without getting too in-depth into the ballistics, let’s look at the velocity and how it affects distance.

As stated above, Winchester’s M193 has a muzzle velocity of 3,180 fps. Below is a chart showing the velocity drop as the bullets travel. You can see a significant decline by the 500-yard mark. This translates to a 3” drop at the 200-yard mark and a 12” drop at the 300-yard mark. As you start looking at the ballistics, you can see how selecting your ammo for the distance you want to shoot is important. When using the M193 target ammo, I like to stay within the 300-yard range before moving to a higher-end bullet.

For general-purpose shooting, running drills, and zeroing in that red dot, the M193 is a great bullet for a quality/cost ratio. There are plenty of brands out there that are cheaper, but I would not recommend the real cheap stuff for sighting in optics. This will only leave you frustrated and endlessly adjusting your optic. The cheaper the ammunition, the lower the quality control in most cases. Quality control is something Winchester does very well.

As always, the best way to test something is to see it for yourself. I could look at charts all day, but who wants to do that? A trip to the range is much more fun and lets me see what the ammo will do firsthand. I had an optic that needed to be zeroed in, so this was a good time for that as well. With a lot of my red dots, I start at 50 yards and then move out to 100 to finish zeroing it in. I fired some shots at various distances after that to see how the group would hold up. The Winchester ammo did about as I expected and held some good groups of two inches at 100 yards.

With cheaper ammo, I have had some bad primers, but this has never been an issue with this ammo. Winchester’s target ammo uses heat-treated casings, and the full-metal jacket provides positive functioning with no expansion. You can get larger boxes, but I like the 20-round boxes for easy access when I’m running out to the range to zero in an optic or run a few drills. When storing boxed ammo, I like to leave it in the box when placing it in an ammo can for the long term. This makes it much easier to grab just the amount you want when you’re headed out the door.

Winchesters 5.56 Target Ammo is some of the best ammo you can get for the price. It is accurate enough to use for a couple of hundred yards and works great for zeroing in those red dots. For long-range scopes, I think I would use a higher-grade bullet, but those get expensive. This is the perfect ammo for day-to-day range time and shoots clean, so you don’t end the day with black marks all over your hands and gun. So next time you hit the range, buy a box to shoot and of course, a box or two is great to put away for that rainy day. 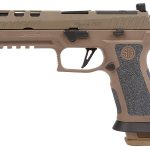