Sig Sauer’s line of MCX pistols and rifles has attained an almost cult-like status thanks to its versatility and reliable function. The MCX Patrol in 5.56 NATO is one of the rifles of the line, and it’s the focus of this video review from TFBTV. Interested in learning more about the MCX line, or about gas piston rifles in particular? You’ve come to the right place.

It’s always nice when someone reviewing a rifle (or any firearm) gets into the details of a particular gun, and that’s exactly what’s done in this TFBTV review:

“So, the Sig MCX was actually designed in 300 BLK and intended to be used with a suppressor, so you have a setting for subsonic ammo as well as supersonic ammo.

“It’s got some pretty nice features, like an [ambidextrous] magazine release and large, oversized bolt catch/bolt release as well as [an] ambi safety and an ambi charging handle. Now, I did find the [ambidextrous] charging handle does kind of get in the way with the mount on the Sig Bravo Four optic they sent over. Now, I admit that I would like to see this [KeyMod handguard] in MLOK, but that’s just my preference; the KeyMod is just fine.

“The folding stock allows you to pack the gun in a place you would not normally be able to put an AR with a 16-inch barrel. I actually quite like it a lot. You do get a brass deflector and a forward assist but it is made out of some sort of plastic material, but I’m sure it’s fine.”

Check out the video to learn more about the Sig MCX and how it performs on the range:

What are some uses for the Sig MCX?

This specific Sig MCX is the Patrol, chambered in 5.56 NATO. Its 16-inch barrel means it is technically a carbine, not a rifle, and also means it’s going to be easier to manipulate. There are a lot of solid reasons to have a gun like this on hand:

Interestingly, the Sig MCX is not an AR, it just looks like one. This is a gas piston rifle with a rotating bolt, which is a bit different and preferred by some shooters. It’s proven itself to many shooters as an accurate, reliable gun – the entire MCX line has done that – so it’s no surprise it’s so popular.

Do you prefer gas piston rifles?

Why or why not? Tell us about it in the comments below. 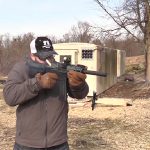 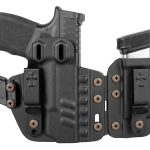